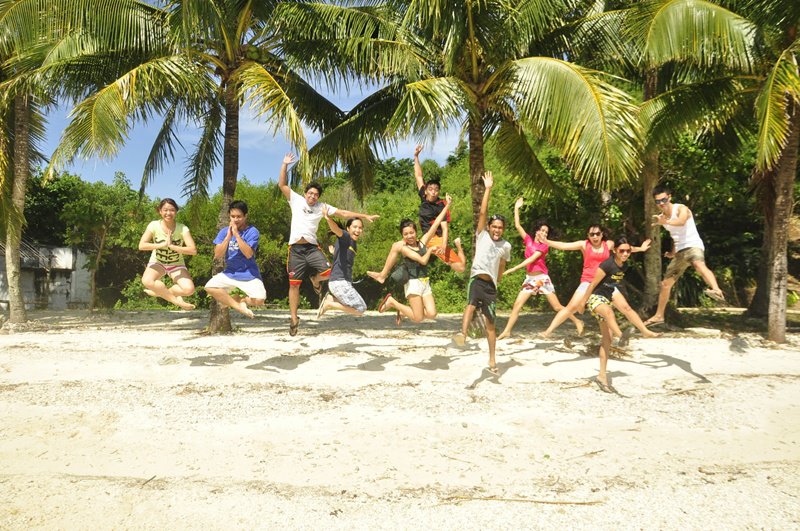 The year’s Independence Day brought me back to the place where I earned my degree. The holiday fell on a Tuesday so one just had to file a leave for Monday and call it a looong weekend. As for my ticket, booking it was semi-accidental; I was just playing around with Cebu Pacific Air‘s Travel Funds when… Boom! Flight to Iloilo confirmed. The destination? Kenyama Beach Resort in Guimaras.

Guimaras Island is a just a 15-minute boat ride from Iloilo. Fare from Ortiz to Jordan was only ₱14. Yes, you read that right. 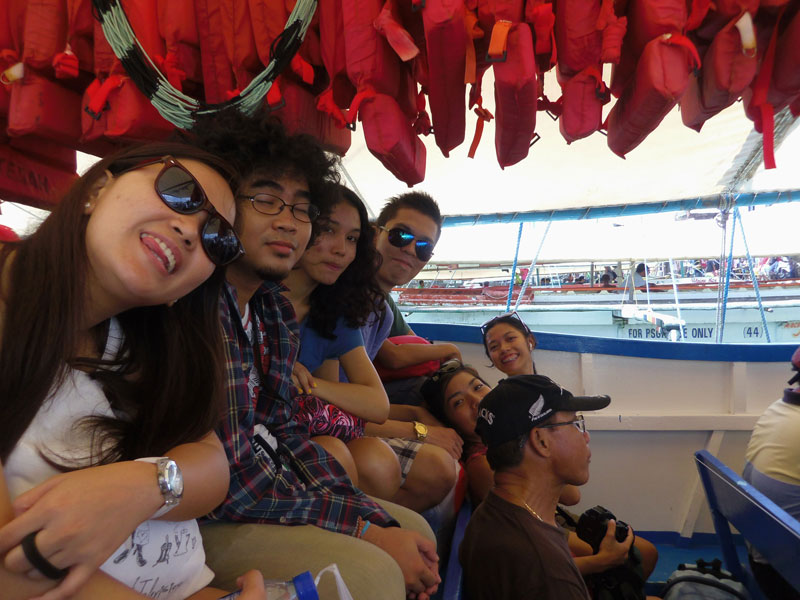 From the port was about an hour of land travel to Guisi where Kenyama Beach Resort is located. The engine overheated so we managed to take the shot below while the driver was fetching water. We had the ride exclusively to ourselves, by the way. 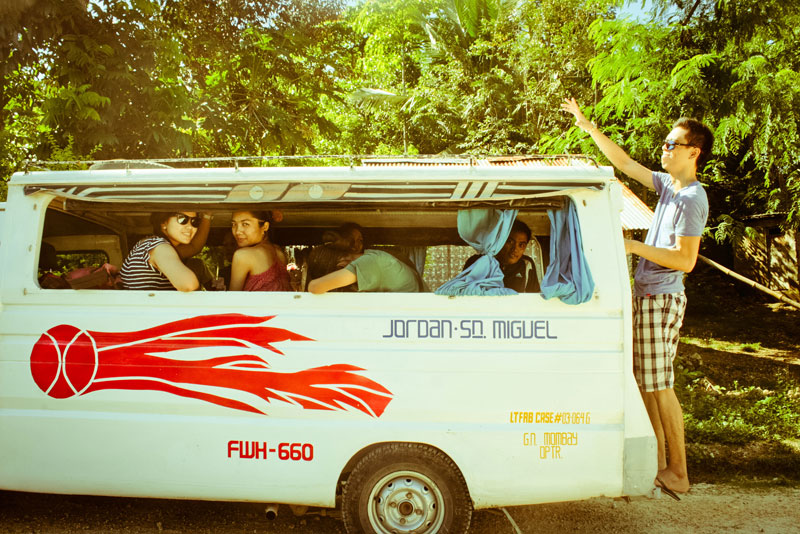 Kenyama Beach Resort is built on the side of a mountain. Welcoming you is a terrace overlooking the beach. It’s a wonderful sight. 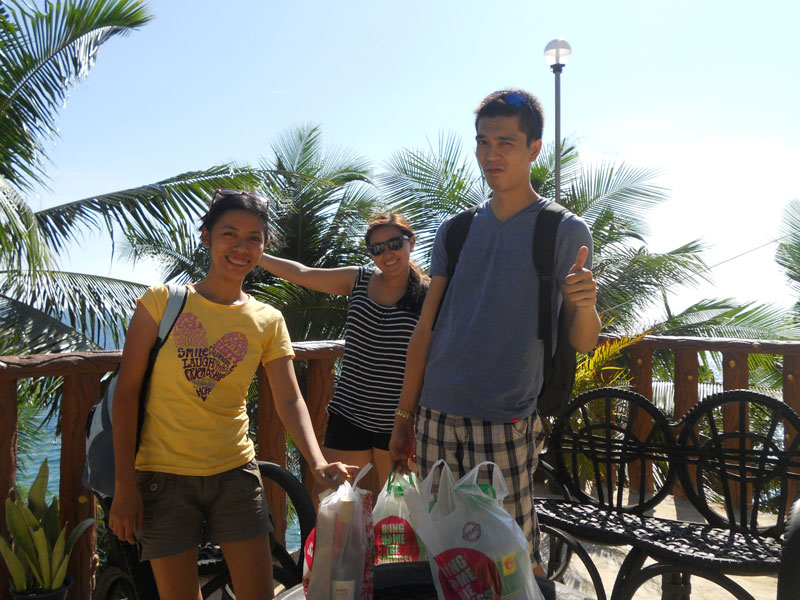 And here’s what I was talkin’ about. Don’t you think those blues are simply lovable? 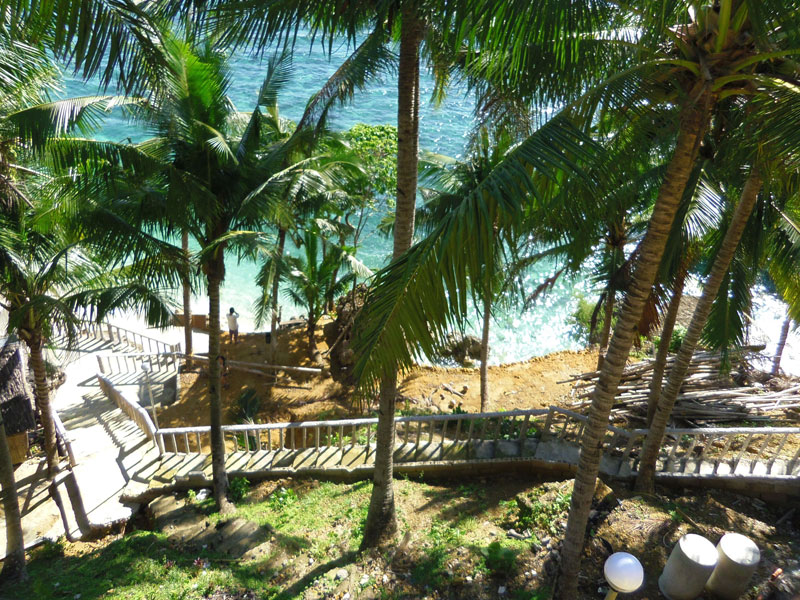 The reception area is also where the dining tables are. It had a pool table which we, despite one of our girls being a bilyaran tambay, didn’t exploit. 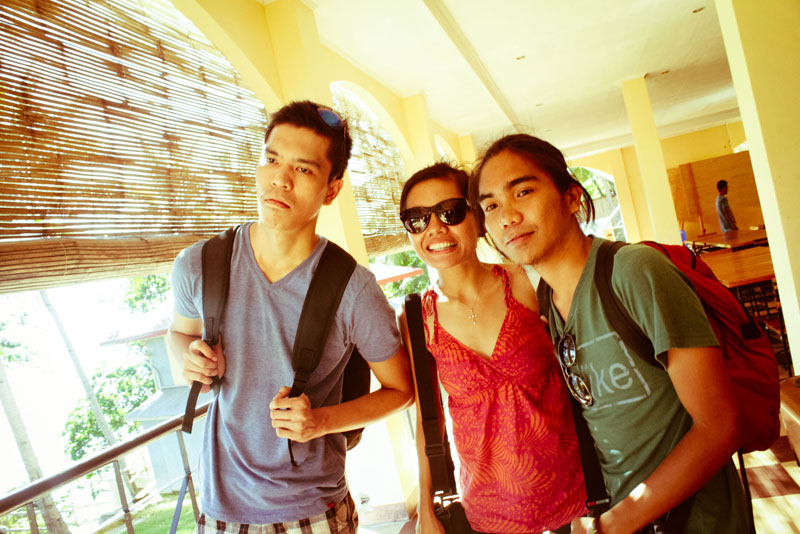 Our room, which had a capacity of 9 persons, originally cost ₱3,500 but since there were 12 of us we rendered an additional ₱300 for extra foams . That room works best for a big group; not air-conditioned but has its own bathroom. 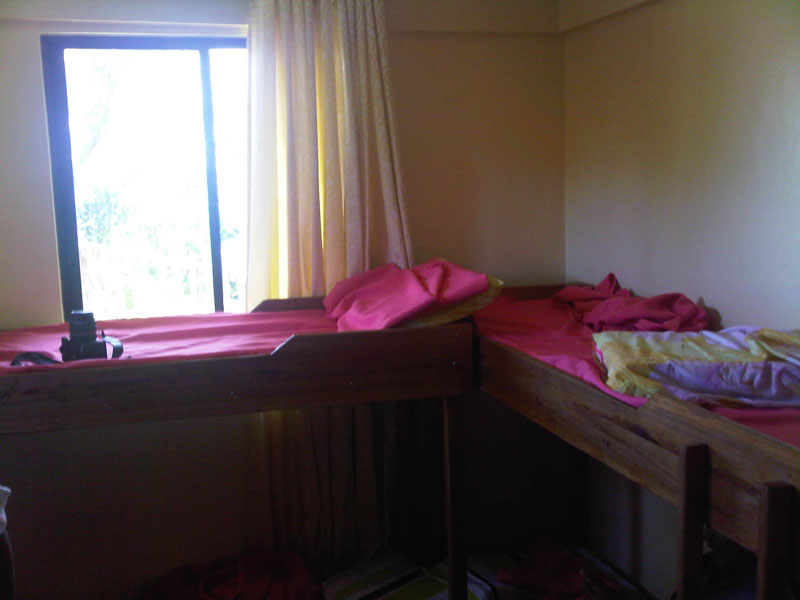 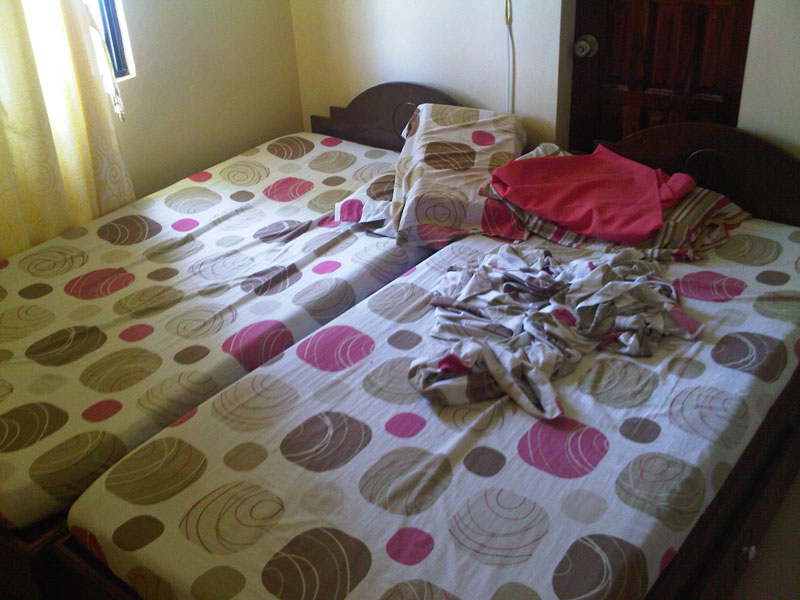 Just outside the room was this view. I will speak no more. 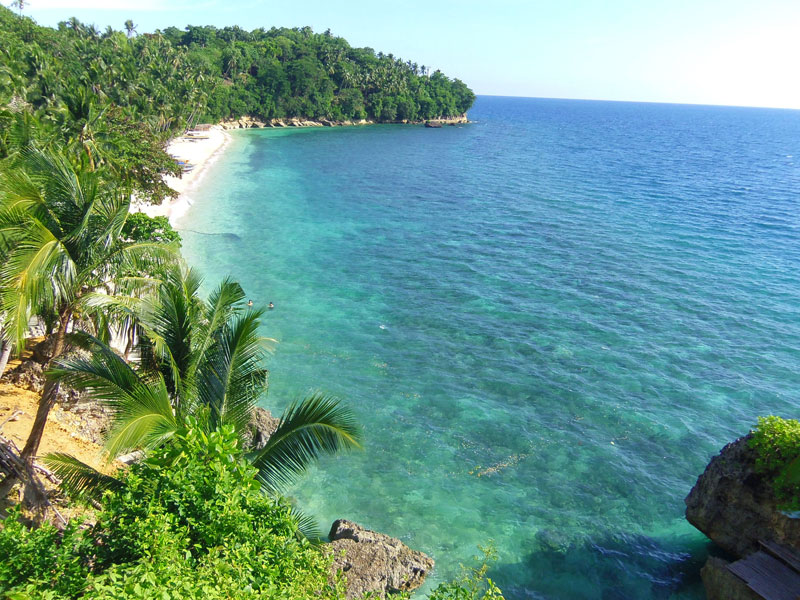 Your friendly neighborhood Spidey also happened to be around. Naturally, he was going berserk from time to time. I was once attacked by one and all I can say is that they’re really strong. Born to be wild, that is! 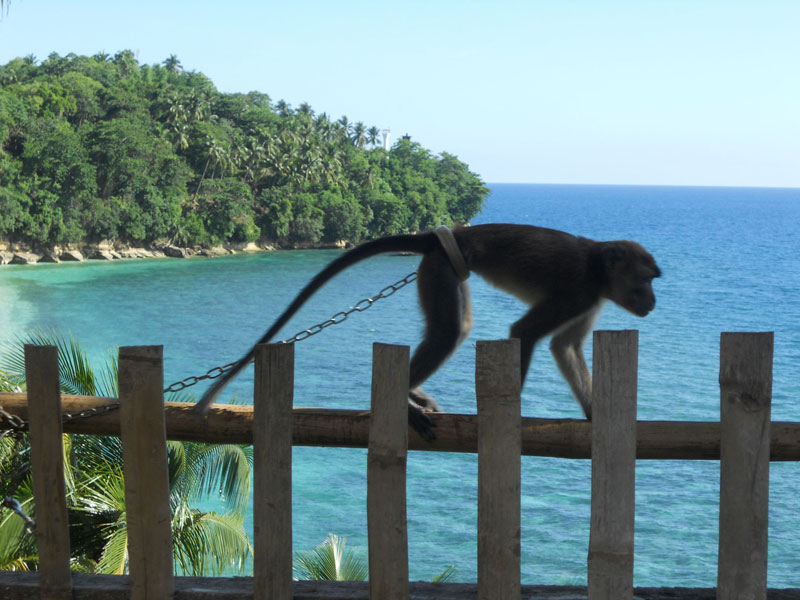 At this point, I decided to buy the entire island as I just couldn’t let the opportunity slip away. Hi’m the king of the world! 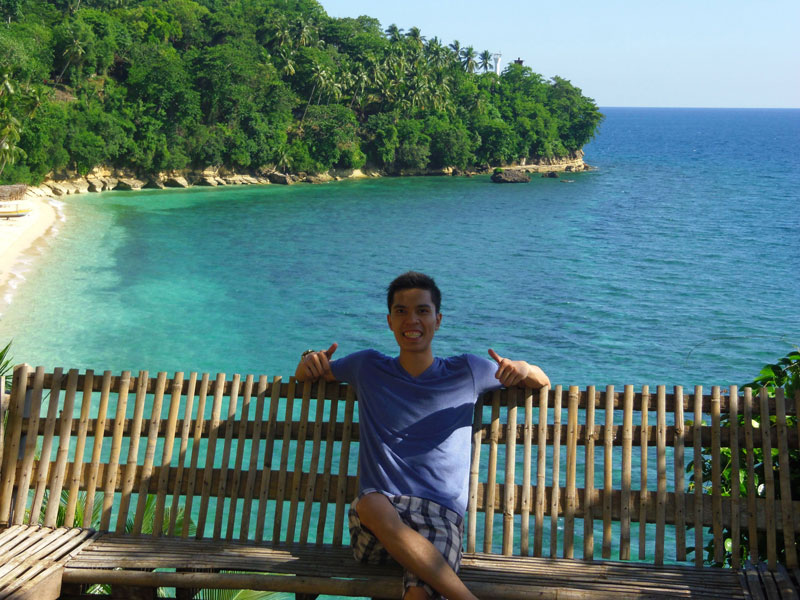 Going down to the beach, I noticed that most of the guests were Japanese. That’s when I realized and knew that the owner is Japanese. The name of the resort itself is one. “Kenyama” could translate to “Ken Mountain.” From that point, my tongue was itching to talk to at least one of them in Nihongo. Too bad, I didn’t really get the chance. 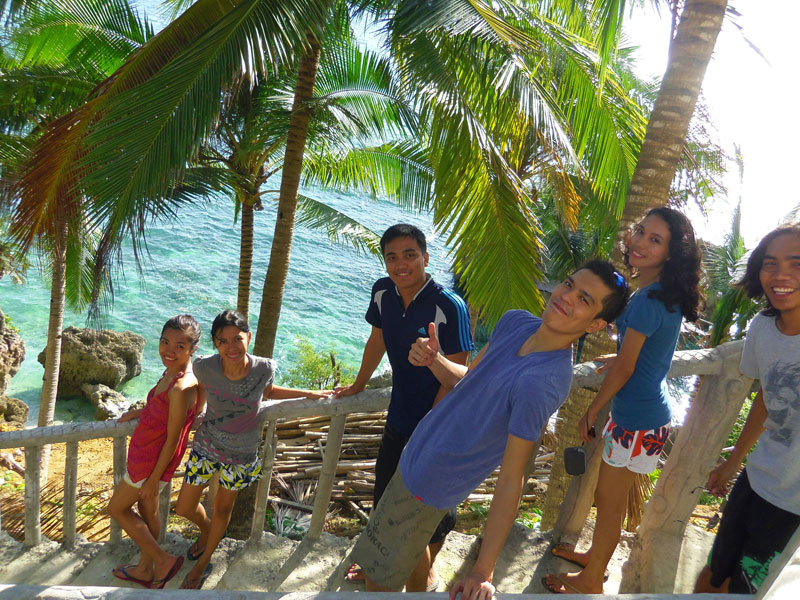 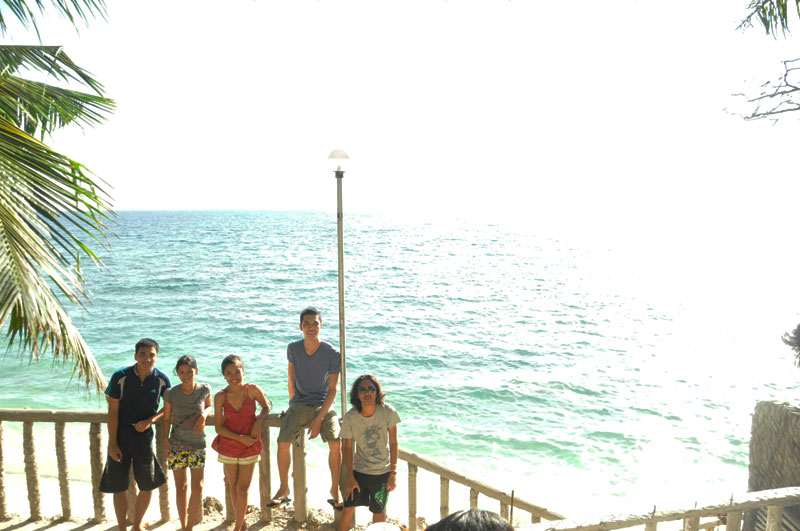 To the left of the horizon was this contour. Braving it was just the perfect thing to do before hitting the waters. 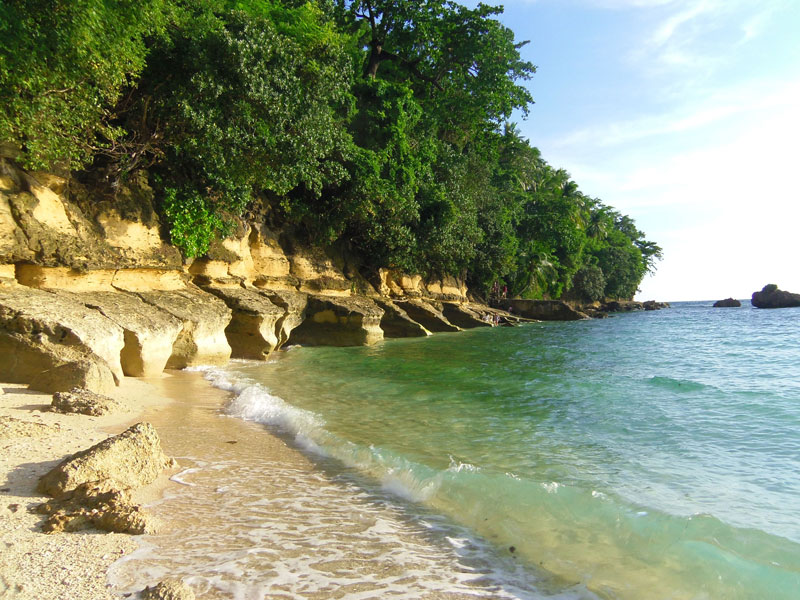 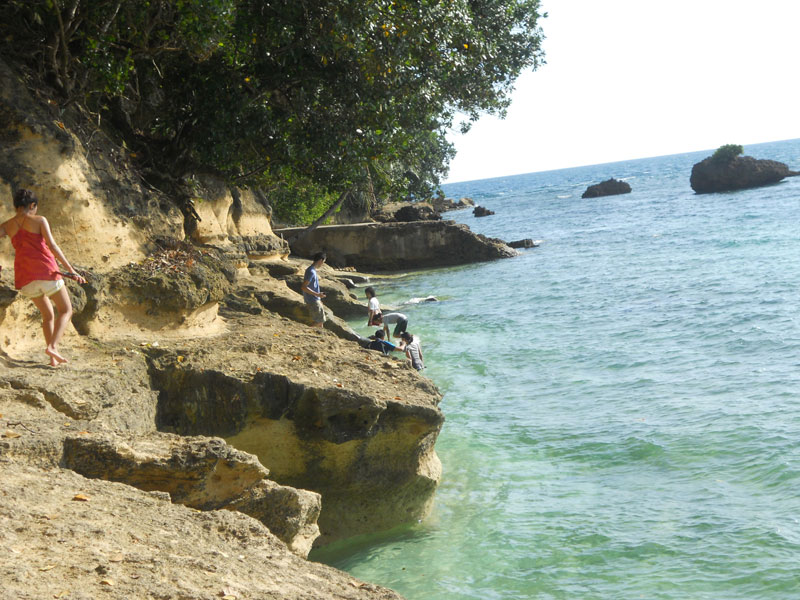 That white building is Kenyama Beach Resort. The tide may have already been getting high during this time but the experience was already too overwhelming that such detail didn’t seem to matter anymore. 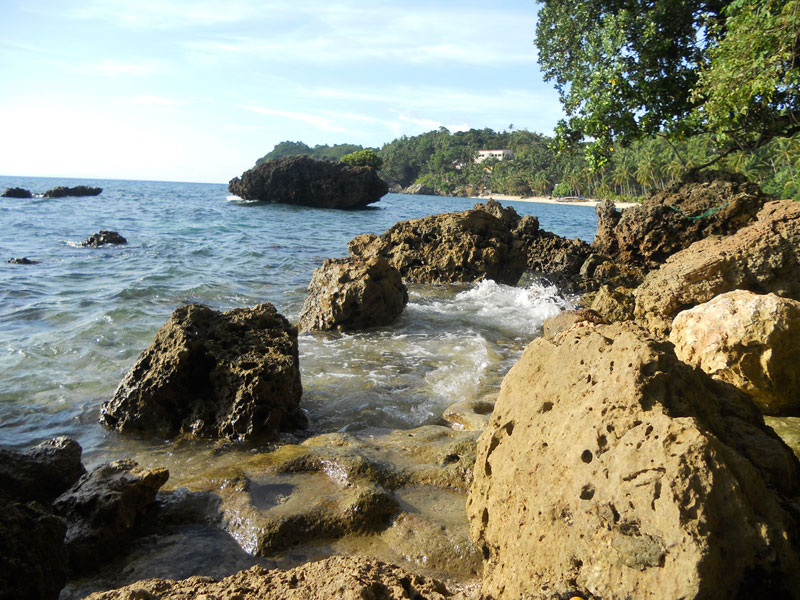 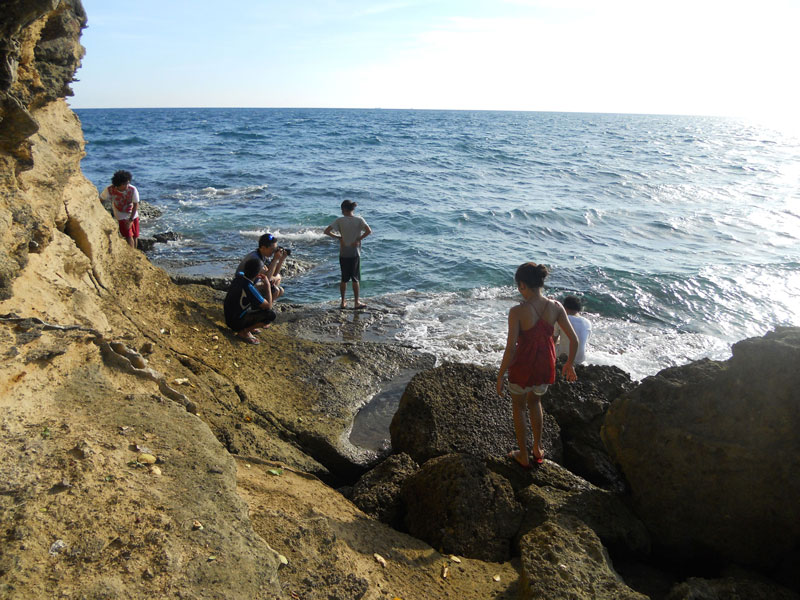 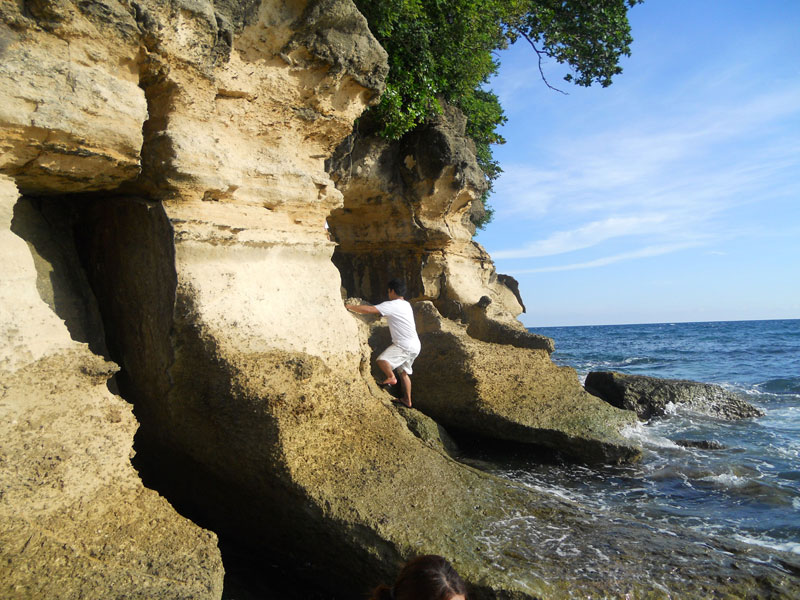 When we reached the point of no return, I mean, the point where we can no longer go further, we just rested and made the most of the picture-taking. Here’s a classic no-smile family picture where there seems to be a traitor. A jump shot here would’ve been nice, but good luck with that. Directly above this spot were lighthouses we failed to visit. 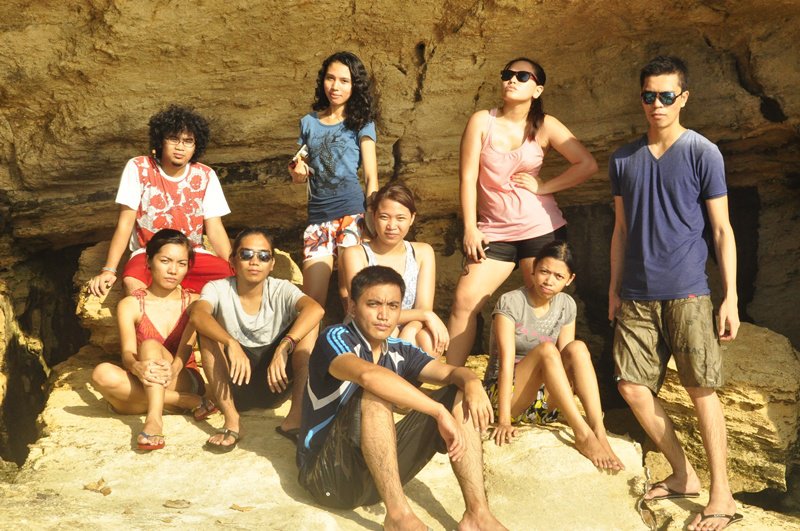 They said that the sand is not as white as other beaches like Boracay’s. I couldn’t tell the difference at all. Let’s just say that as long as it’s not grey, then it’s already white for me. 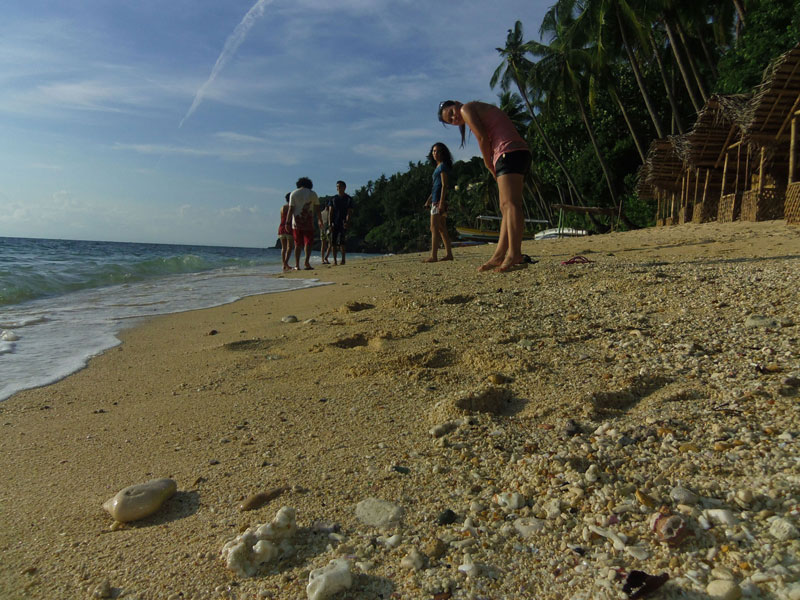 Finally, it was time to splash some seawater. To the right of the horizon were rocks where you could jump from. However, as much as I would love to dive, I don’t know how to do the stunt. (None of us does, actually.) Presenting the seven brave souls!

Before calling it a day, we had these lovely shots with the setting sun. Thinking about it now, it would’ve been cooler if we were jumping into the water. But for every unappealing shot, a retake would require tremendous effort. 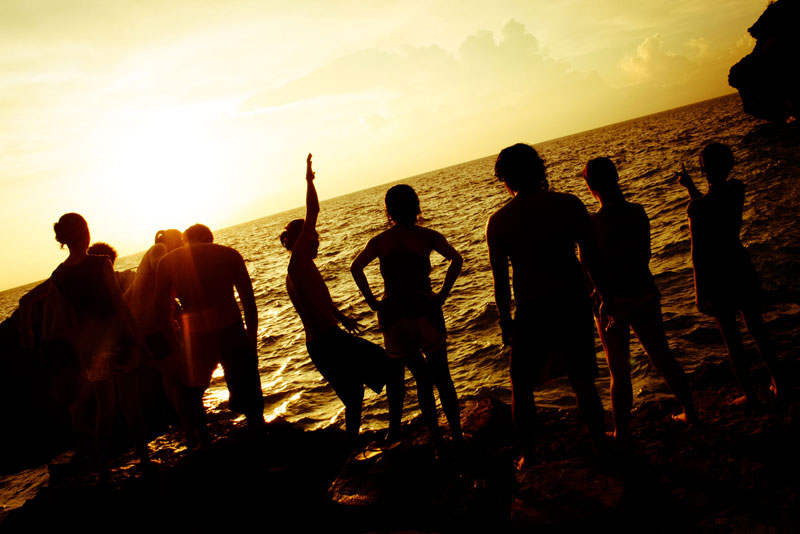 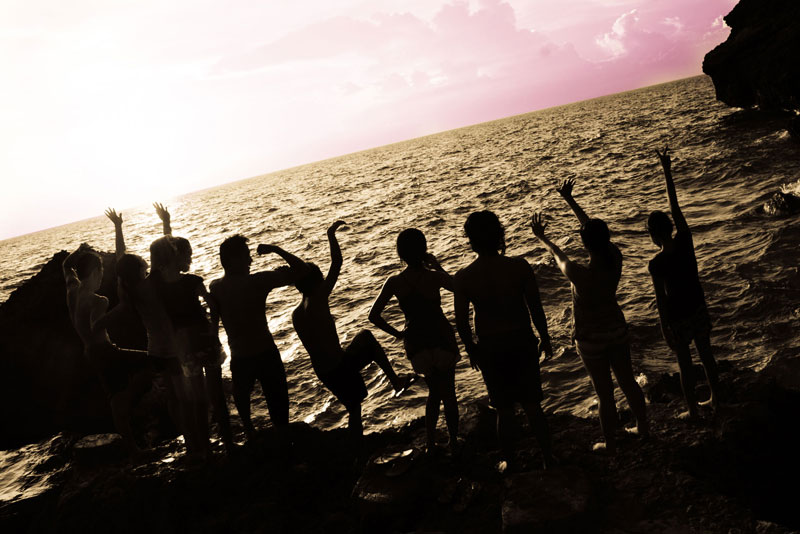 Dinner was catered by the local store nearest the resort because we didn’t have the budget for the food available at the restaurant. Since it was already a bit late, we were only left with corned beef, sardines, eggs, and fish. When the food arrived, it just showed how fine of a dining it was given our grumbling stomachs. Two and a half kilograms of rice? Gone in the blink of an eye. Over drinks, I became the laughing stock (even in Twitter!) when I posted about the local name of the fish as “tabaghak” instead of “tabagak.” You have the resort’s Wi-Fi to thank for that.

After breakfast we immediately had our arses on board for the island hopping. Unfortunately, the guides claimed that the waves weren’t friendly so we wouldn’t be able to visit some caves. We only stopped on two islands that it turned out more like an island sightseeing instead. The views were wonderful, nonetheless.

During our first stop we witnessed extravagant sequels of infamous action-packed movies. Feel free to think of the titles that first come to mind. 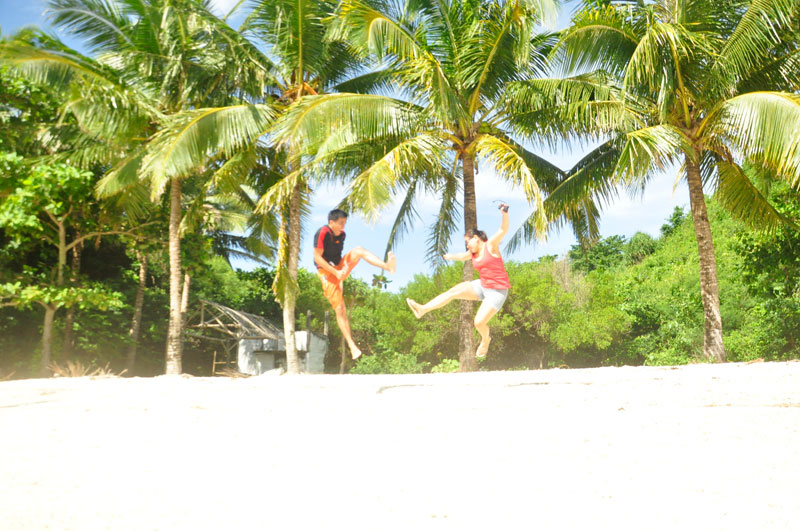 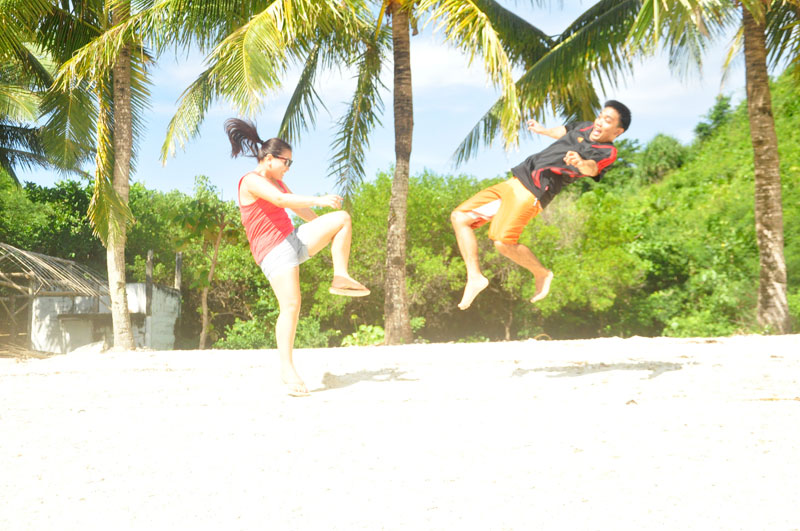 Splurging in the crystal waters of the islands was obligatory. Those different shades of blue look very enticing if you ask me. 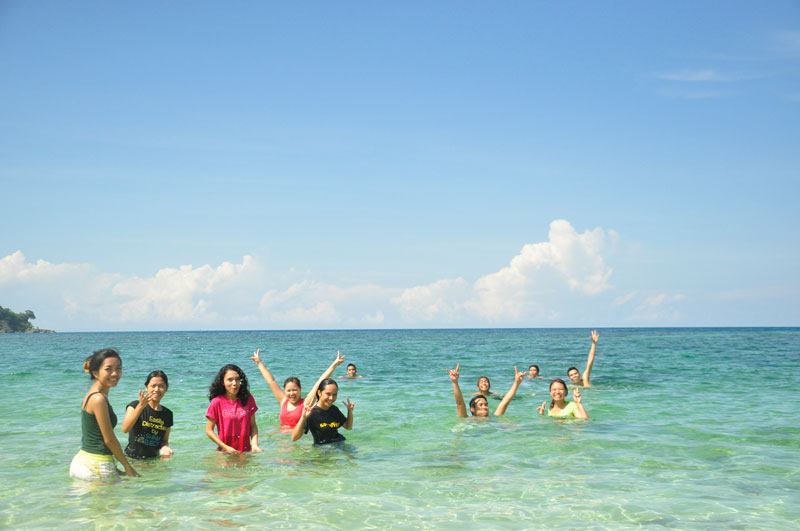 Since we no longer had a particular destination after a U-turn, we asked for a stopover in the middle of the ocean. There were life vests, but those who were incapable of “kicking water” still didn’t take a dip. When I tried to reach the bottom I felt my ear exploding; my classmate succeeded. 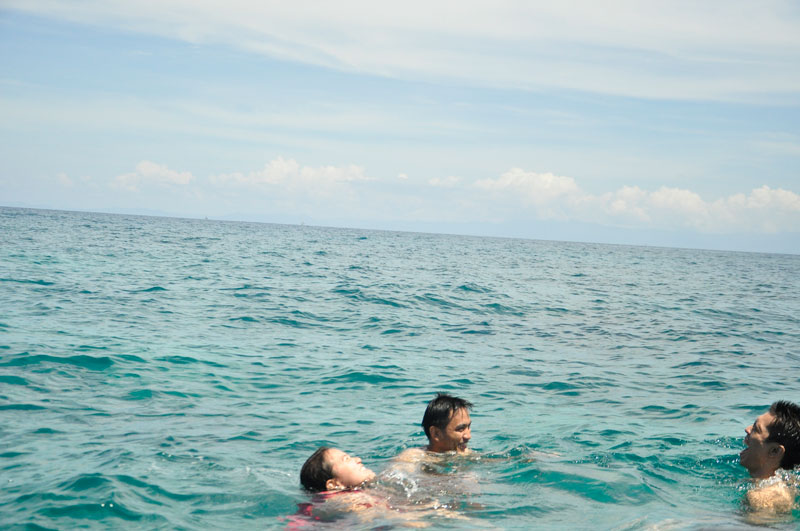 We went for a few more rounds of cliff jumping under the bright sun. The clear sky made the view even more admirable. I reached this spot by swimming all the way behind a bigger rock on the left. Man, that was tiring (and risky). My feet must’ve been very tired from treading that I found it hard to stand on the rock beneath the one on the surface; sustained my fourth and biggest cut, on the left foot this time. 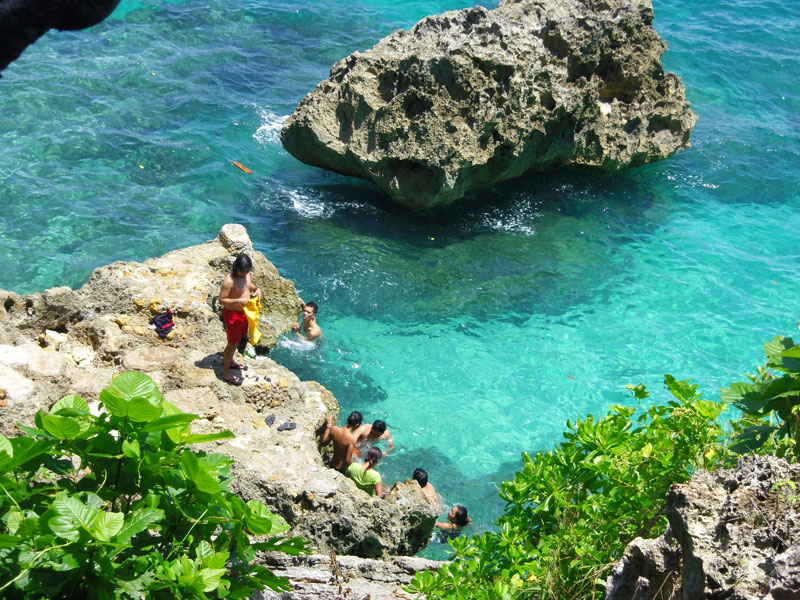 To the right was a way higher rock with stairs leading to its top. It couldn’t be reached by foot so we had to swim to it. Three of us dared to jump off it and to avoid injuries, one surveyed the depth of the water first. “Cowabunga!” It was strange why there were no lookouts for people like us who would do such feat. Perhaps ’cause the resort was still new? In any case, people should be responsible of their own actions. 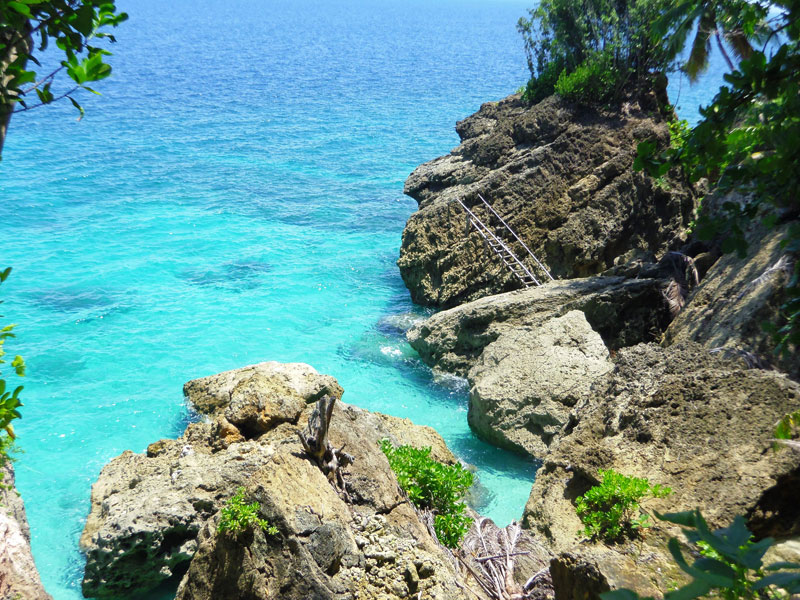 Prior to our trip the weather was all gloomy. I couldn’t be more thankful that it eventually cleared up. This post proves how much I had fun as I’ve never blogged about traveling before. Travel while young (I know, the line’s overused) and credits to Glo, Lairy, Marianne, and Peace for the pictures!