For a change, I spent Valentine’s Day on the beach with two of my roommates when I was a college freshman. On the eve of the Dinagyang Festival, we were out drinking, celebrating it our way. That’s when they mentioned their plan of visiting Maniwaya Island in Marinduque. As I can’t just let this life pass by without seeding my seemingly growing love for the beach, I didn’t bother putting up a fight.

We took the 11:00 PM JAC Liner trip on a Friday from Buendia heading straight to Dalahican Port. If it isn’t available, you can just take one heading to Lucena and from there you can get a ride to the port. Travel time was three hours. 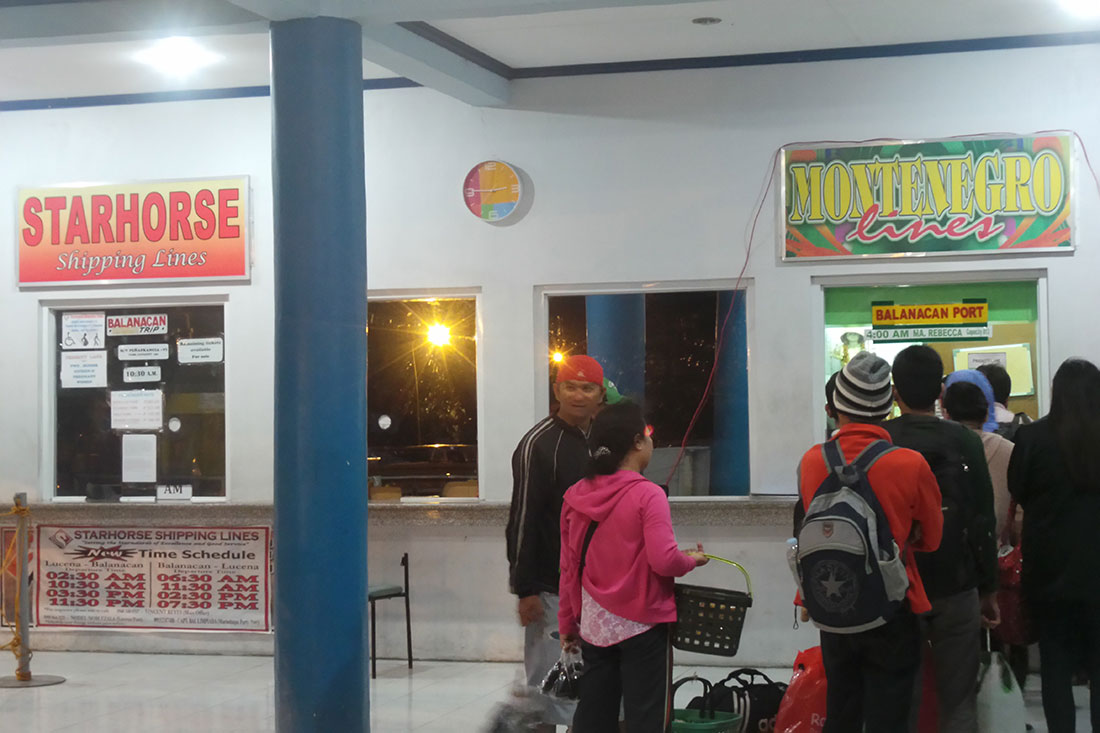 As of writing there seems to be only two shipping lines from Lucena to Marinduque: Starhorse and Montenegro. I had no idea of the schedule at all but thankfully the latter had a 4:00 AM trip. The next one to it was late in the morning. Much time would’ve been wasted.

I must say I missed traveling by sea. I used to do it a lot in college with SuperFerry and Negros Navigation, when traveling by air wasn’t favored for me. A jacket would greatly help as it can be freezing even after daybreak. And yes, those benches will be your beds. 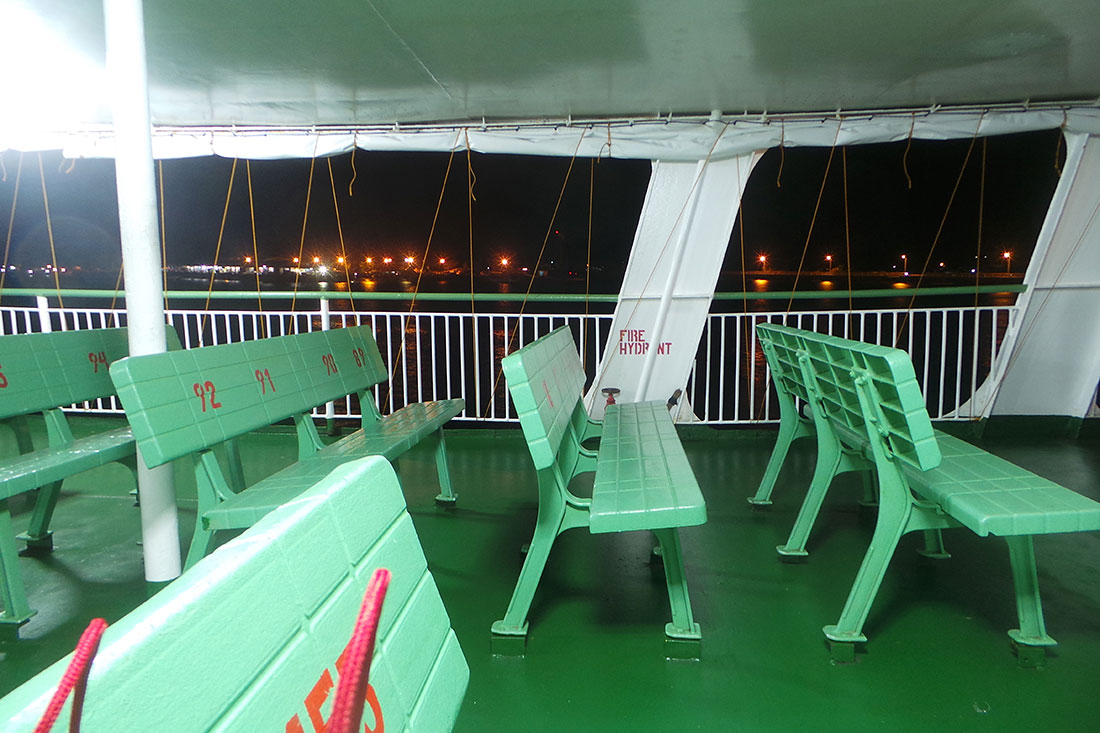 Travel time to Balanacan Port in Marinduque was another three hours and public transportation was readily available upon arrival. We took an hour-long jeepney ride to Santa Cruz which, surprisingly for me, is a first class municipality. We had breakfast at Rico’s Inn where the tricycle driver who spotted us the moment we got off the jeepney didn’t stop bugging us. I had tapsilog and lomi. Perfecto. 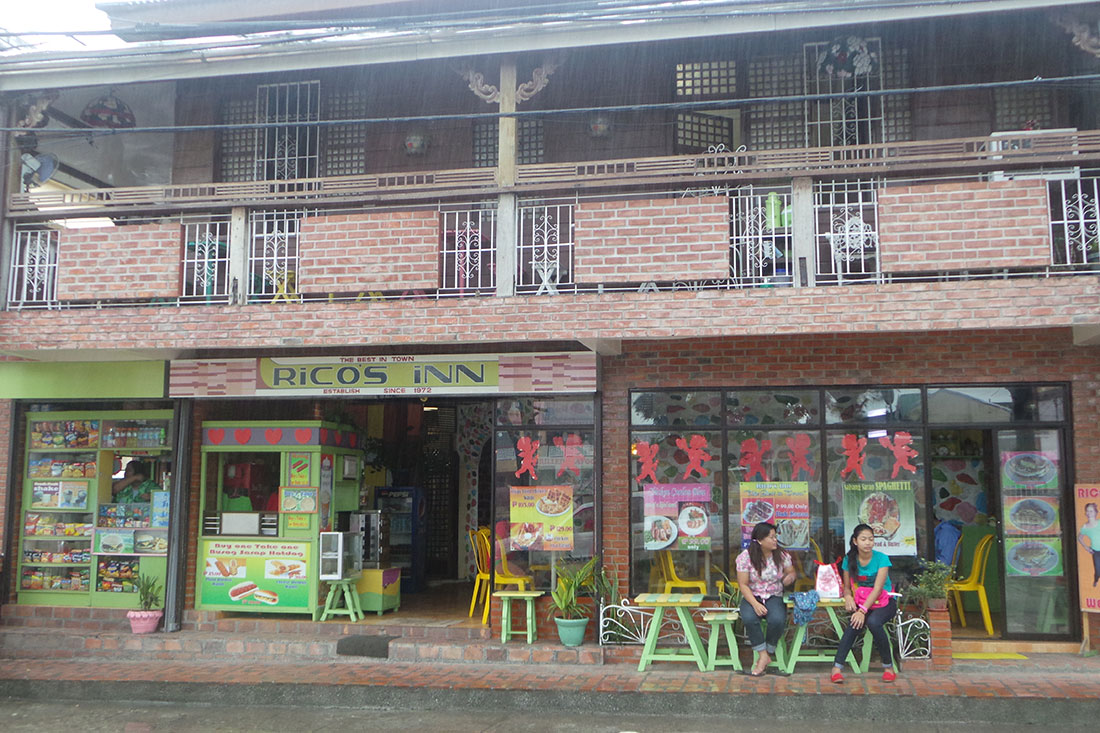 We gave in to the nuisance of the driver and allowed him to take us to the grocery and wet market. When everything was already in place, we headed to Buyabod Port which was roughly 15 minutes away. He asked us ₱200 for all those rides! If there’s one thing that I always do when traveling, it’s asking the fee for a ride before taking it. I was caught off guard this time.

The weather was totally gloomy and rainy yet the water was calm. In 30 minutes we were already on the island, looking forward to what lies ahead. 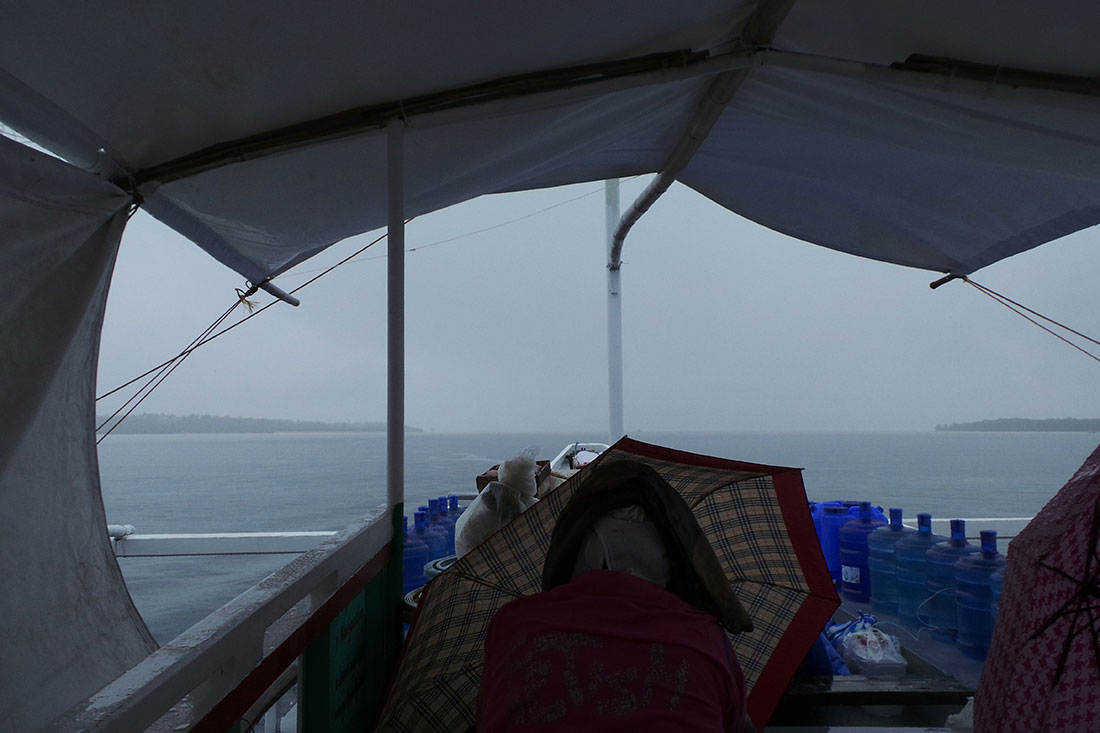 Apparently the port in Maniwaya Island was damaged by a typhoon. From there, motorcycles can take you to the resort you’ll be staying at. 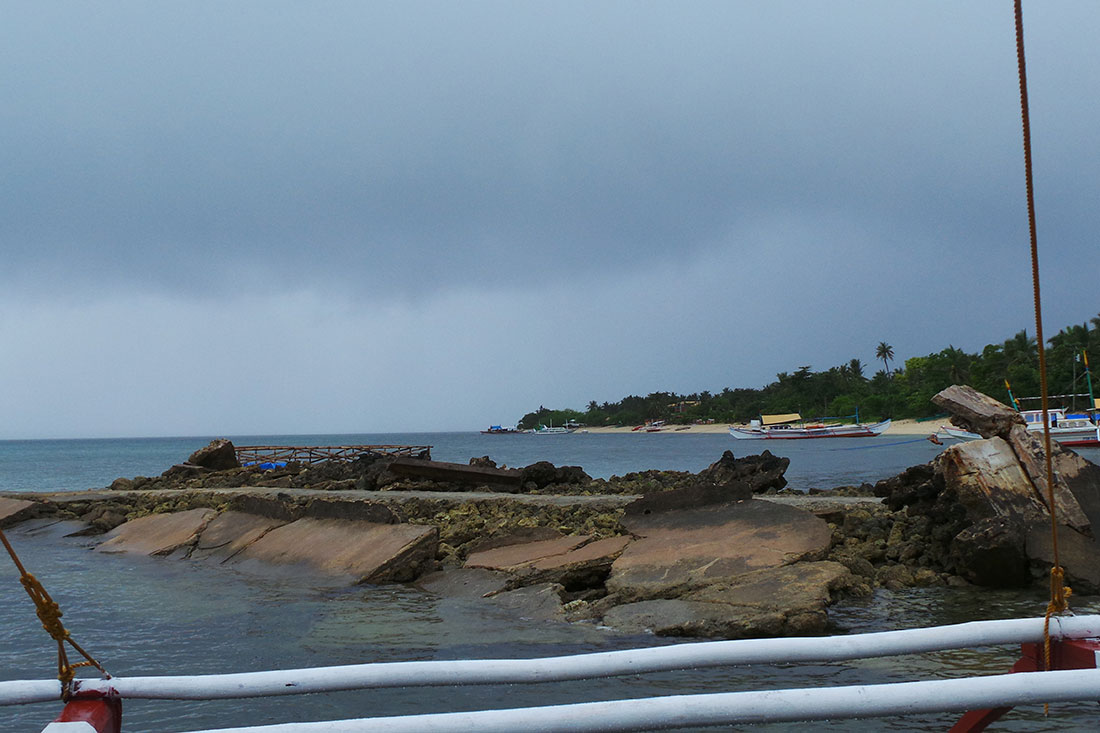 Upon arrival, we were immediately welcomed by Mr. Warlito Constantino, the resort owner. Unlike my companions, I was glad there was another group in the resort. They had the room next to ours and also had three tents set up. 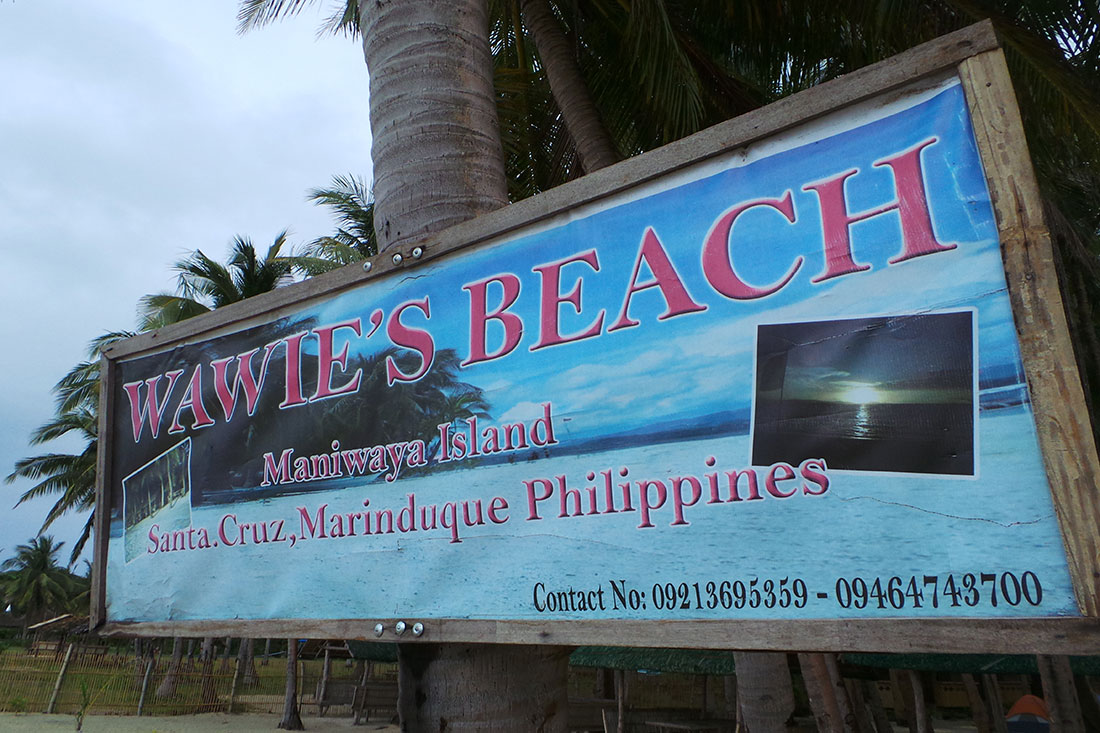 And here’s the first taste of the beach. The sand is actually pretty fine but the amount of stones sort of conceal its quality. 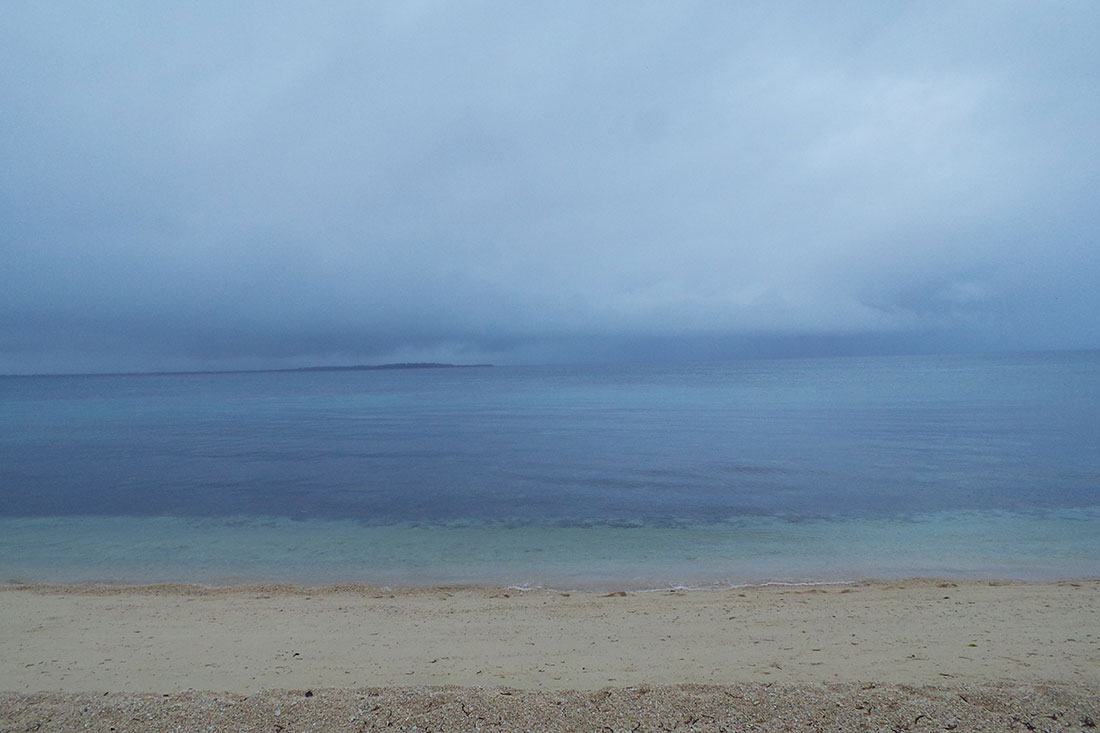 I find the place similar to Anawangin in Zambales, with coconuts around instead of trees. You can see the tents I was talking about earlier below. Pitching one cost ₱300. As for the huts, they can be rented for ₱500 each. There also happened to be a karaoke machine for ₱1,000. 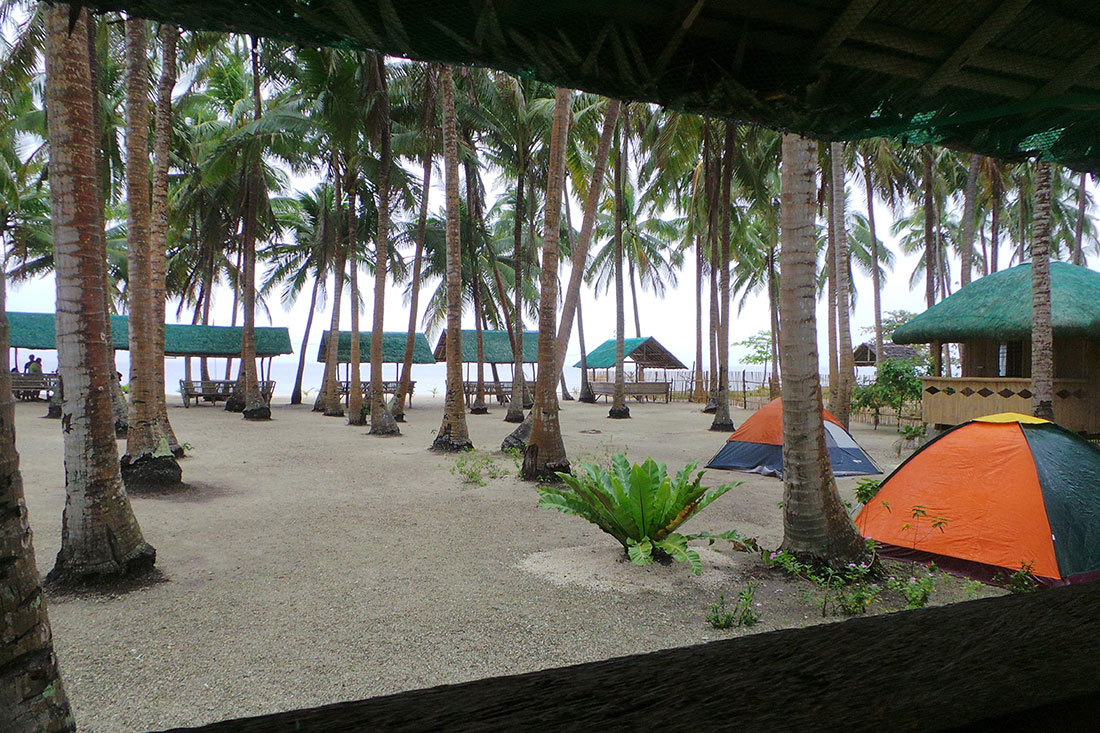 The kitchen can be used for ₱35. It had a stove and a complete set of cooking and eating utensils so if your group will be cooking all you need to bring are the ingredients and condiments. There was also drinking water but you can always bring yours as well if you want it that way. 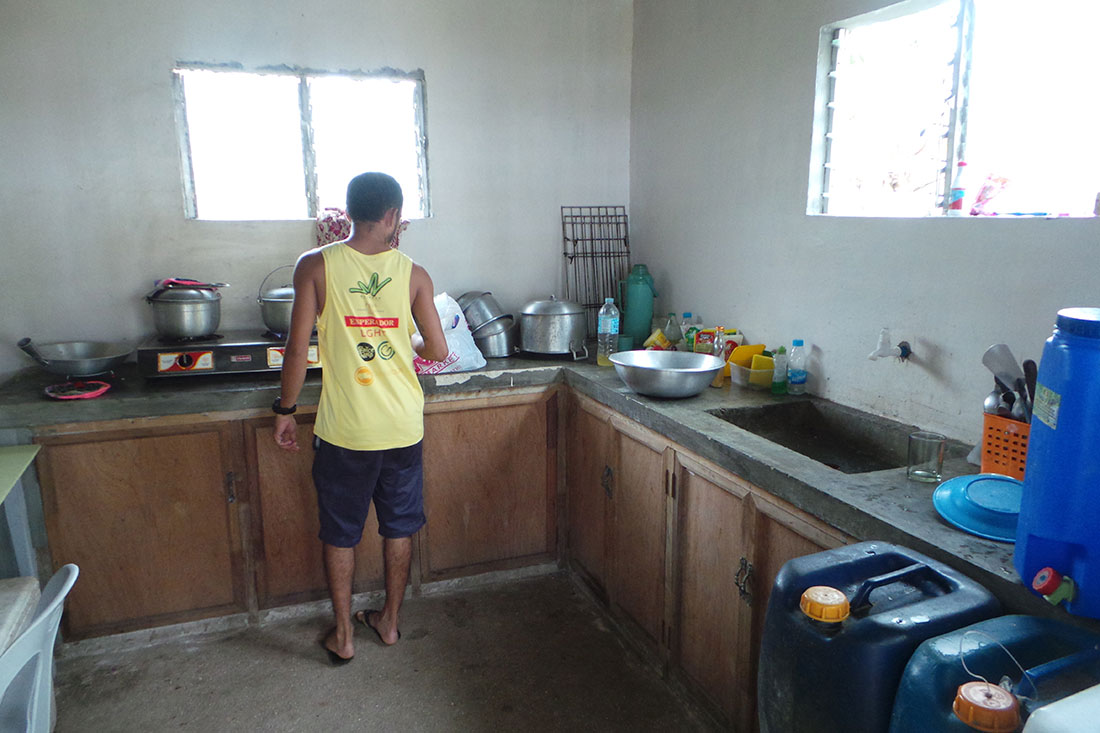 The cottages, I think, were all of the same size and could probably even accommodate up to five people given the size of the foam on the floor and the sizes of the occupants. 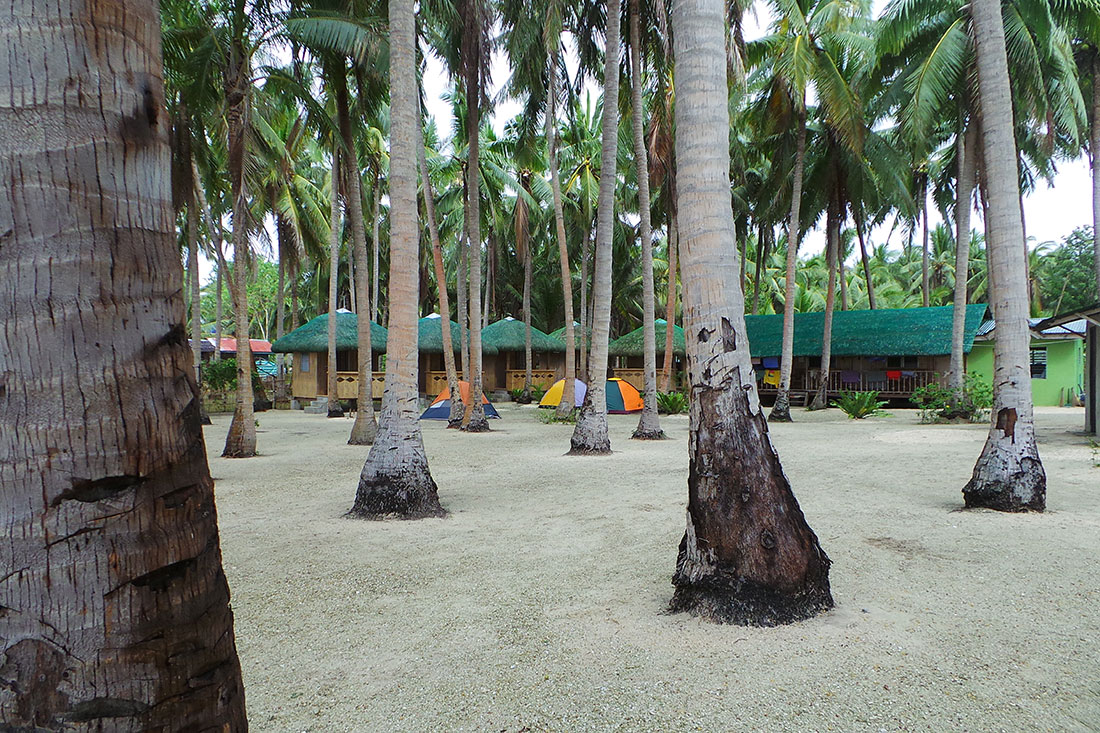 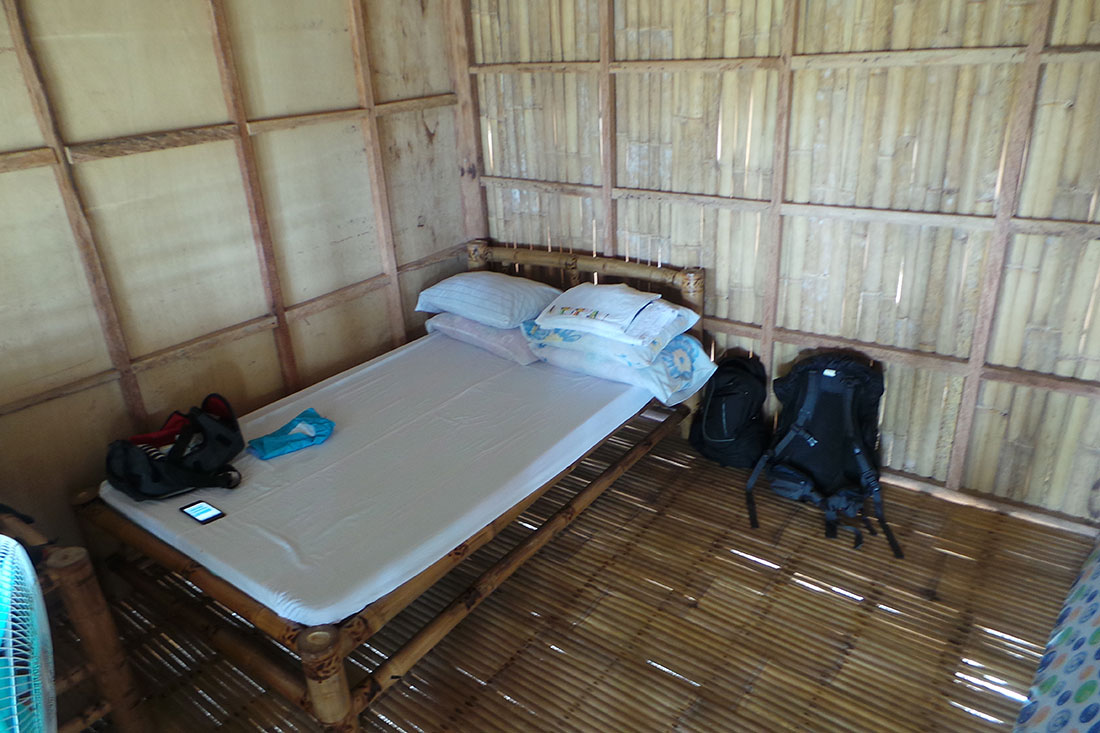 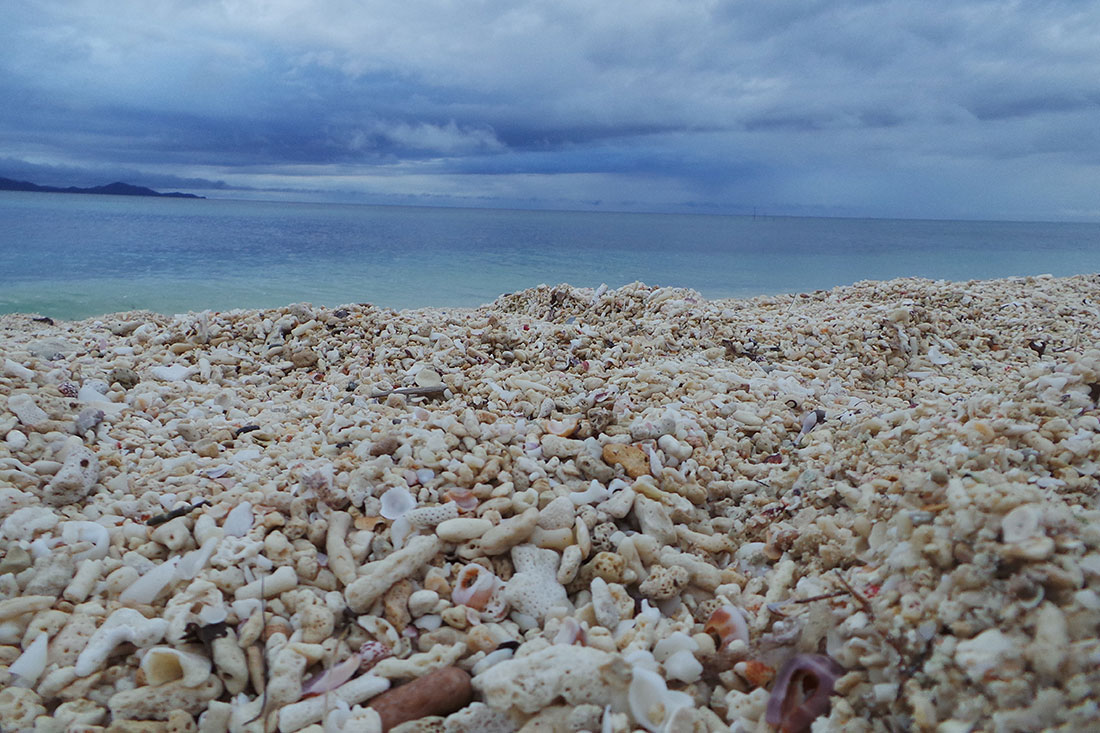 The rain ditched us like an almost-lover in the afternoon but there was still no sun, making the scenery positively blue. 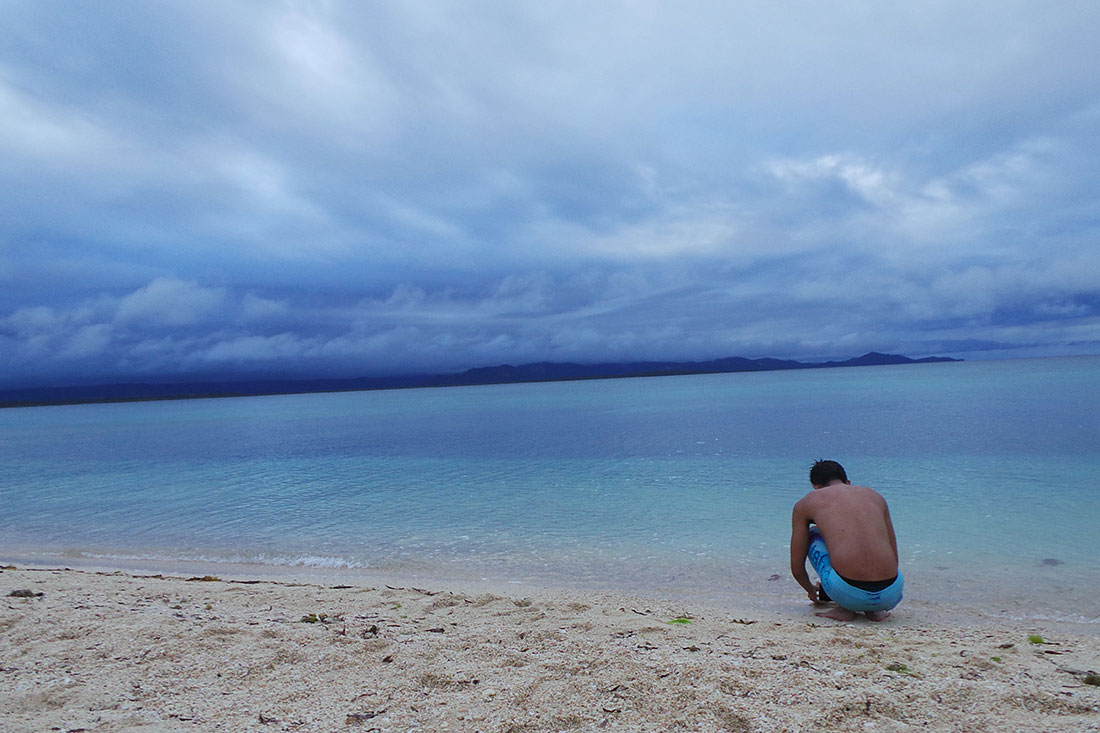 A glimpse of the sun and all the hues of blue led me to doing one of my allegedly signature poses. As envious as he was, my friend in a bottle also posed. Ugh. 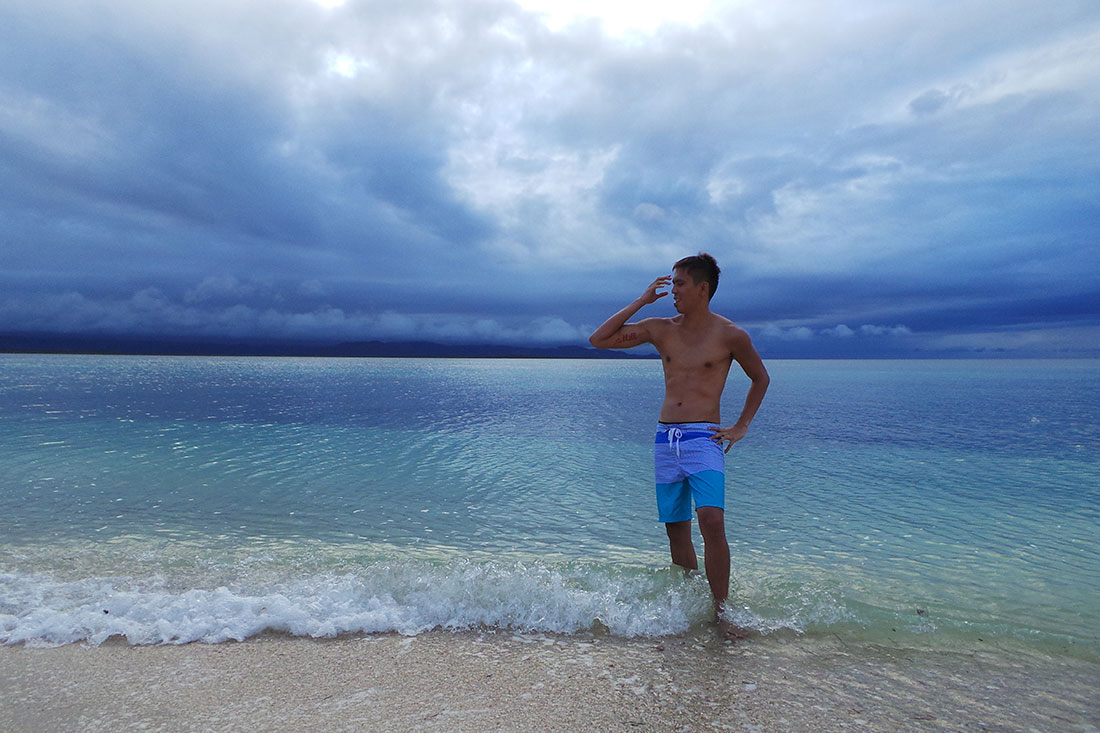 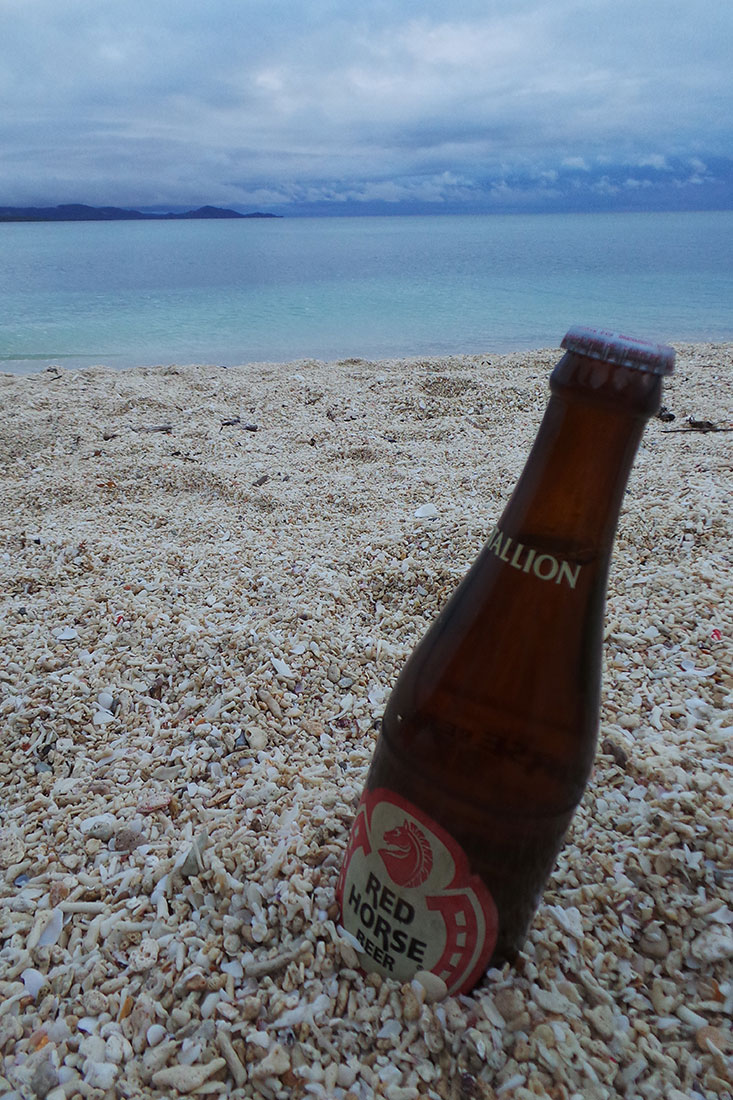 The following day the sun outshone its shyness and we had a game of stone skipping. What can I say? I sucked at it. Was a good start though as I don’t remember any instance of me ever doing it. 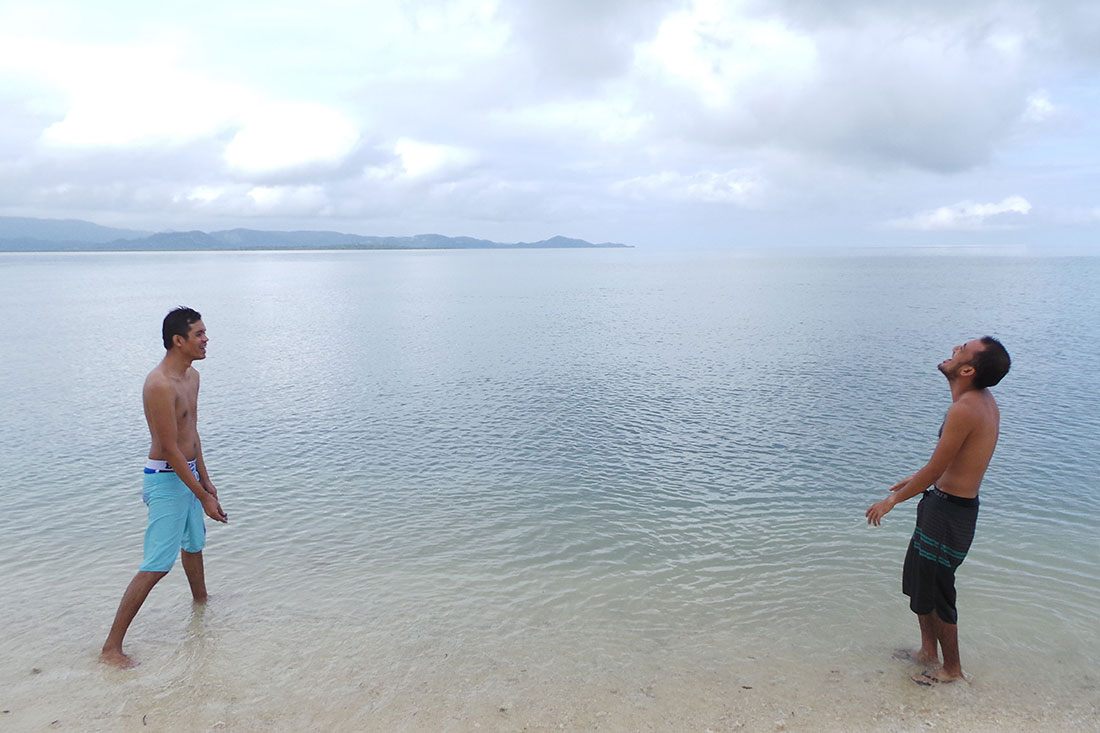 We explored the left side of the shore and found a good spot for taking photos. Timer, set, go! We must’ve looked silly from afar. 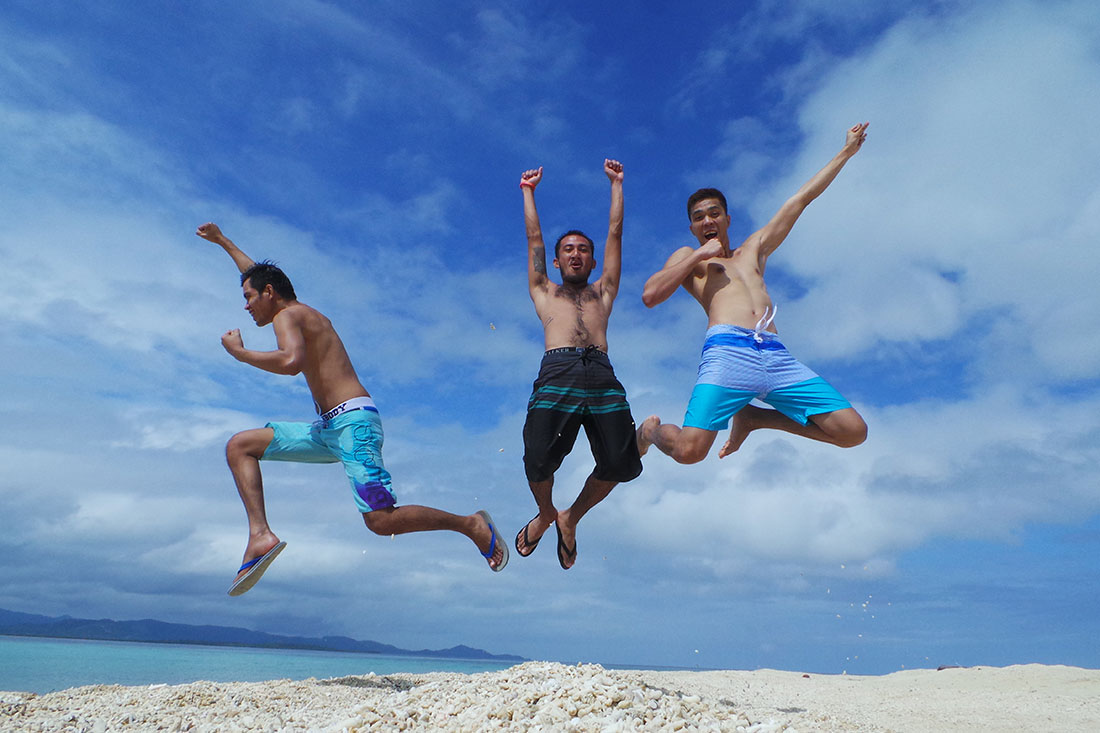 This part of the beach also happened to have less seagrasses. 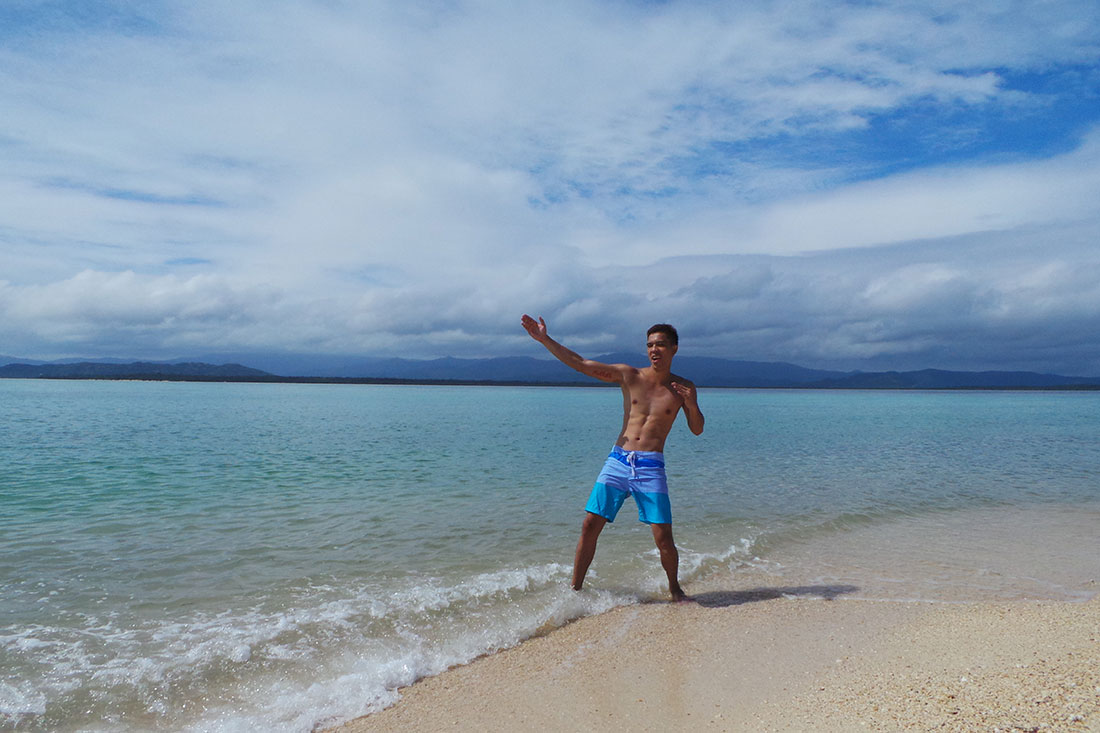 Leaving the island was my primary concern as the only trip going back to Santa Cruz was at 7AM. However, we ended up not leaving that early because apparently there were two more options for going back to Manila. Maniwaya Island is a stopover for boats from Marinduque heading to General Luna in Quezon and vice versa. The former stops by at 10:00 AM while the latter is at midday. We were told there were no passengers heading to General Luna so we got on the second one. 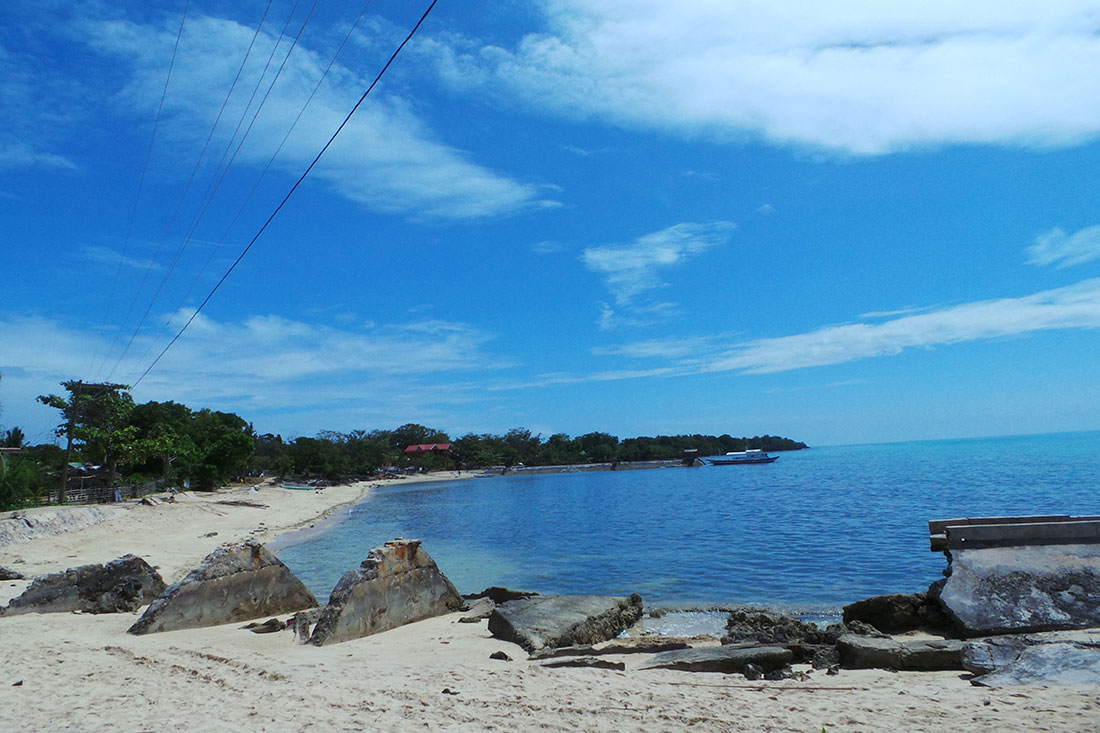 From Santa Cruz we took an hour-long jeepney ride to Boac, the province’s capital. It was so reminiscent of Vigan with its old structures. We didn’t bother rushing ourselves as there were ferry trips even in the evening. We just had lunch, relaxed, and killed time in Kusina sa Plaza where the food was a bit pricey. 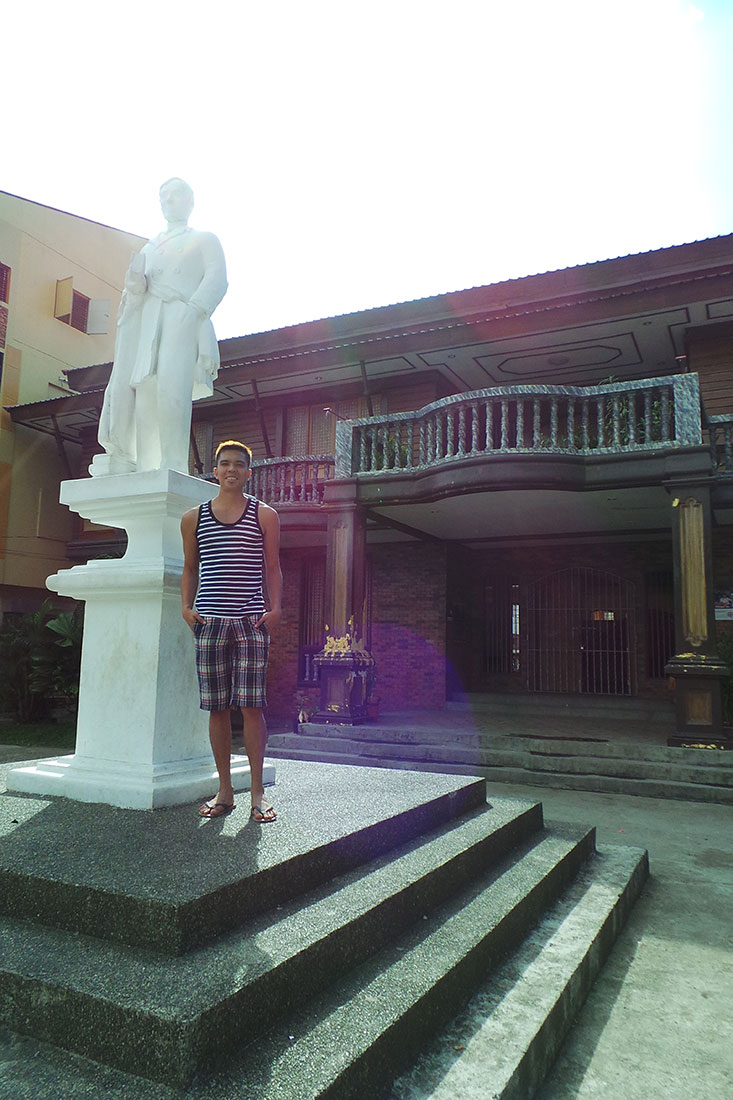 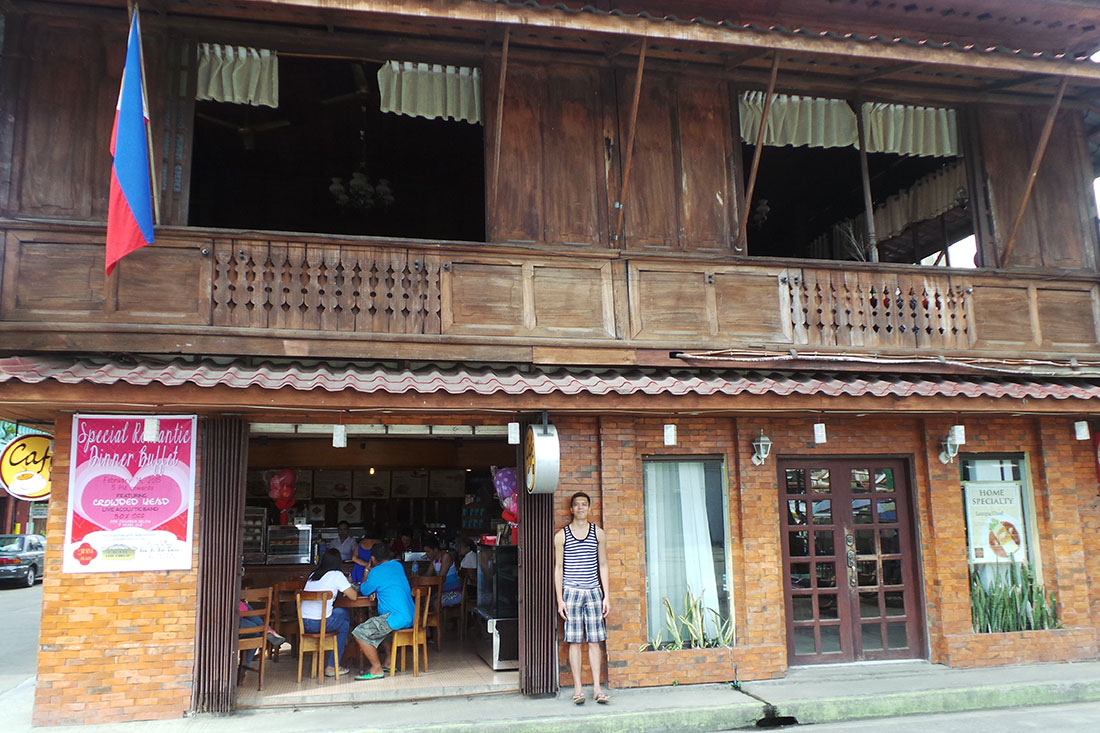 Their café was a different story though. The food was heavenly; the Mixed Berries and Kusina’s Special were, for lack of a better word, uhm! 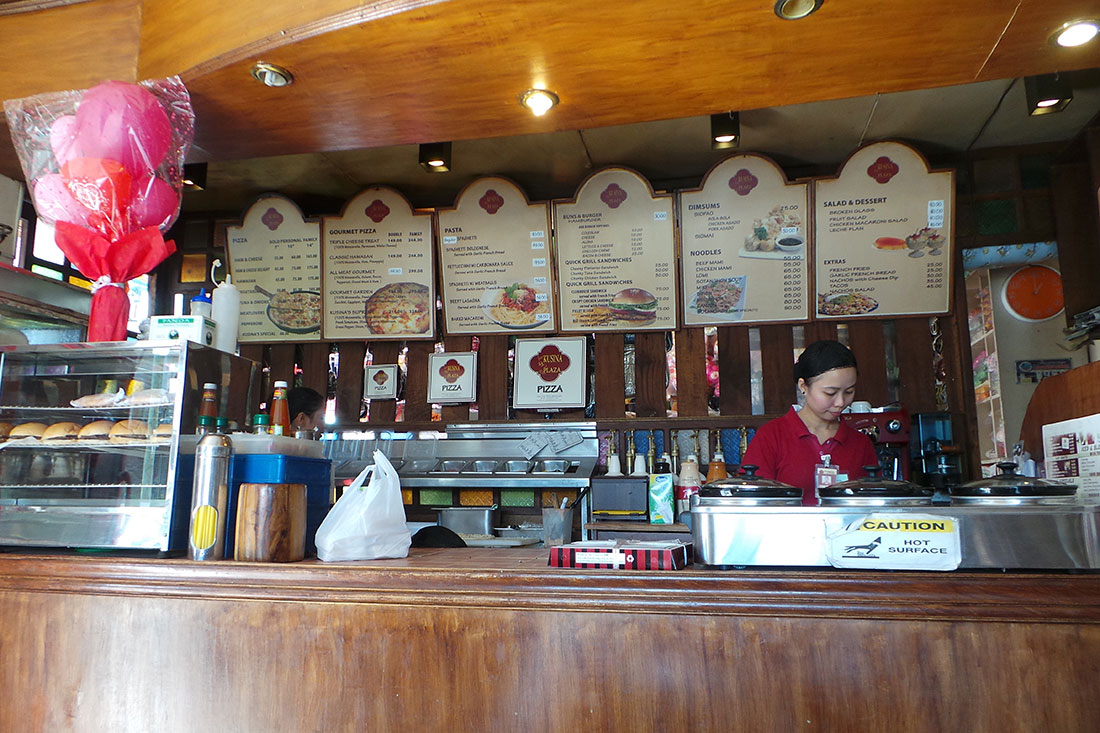 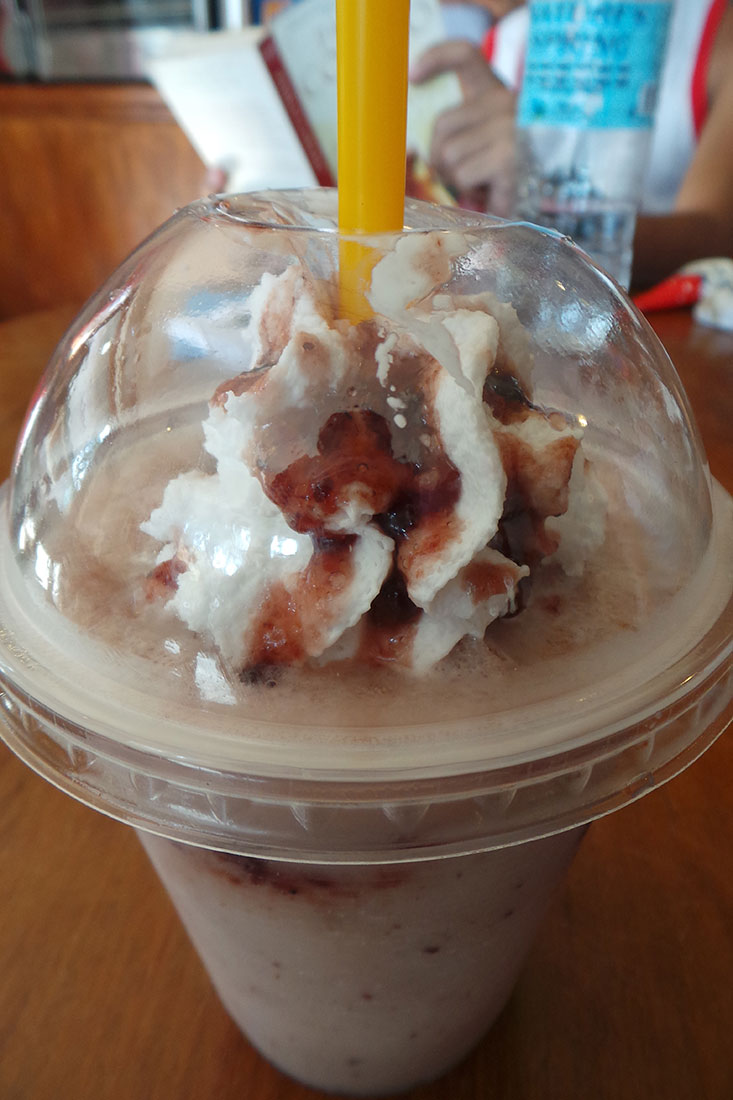 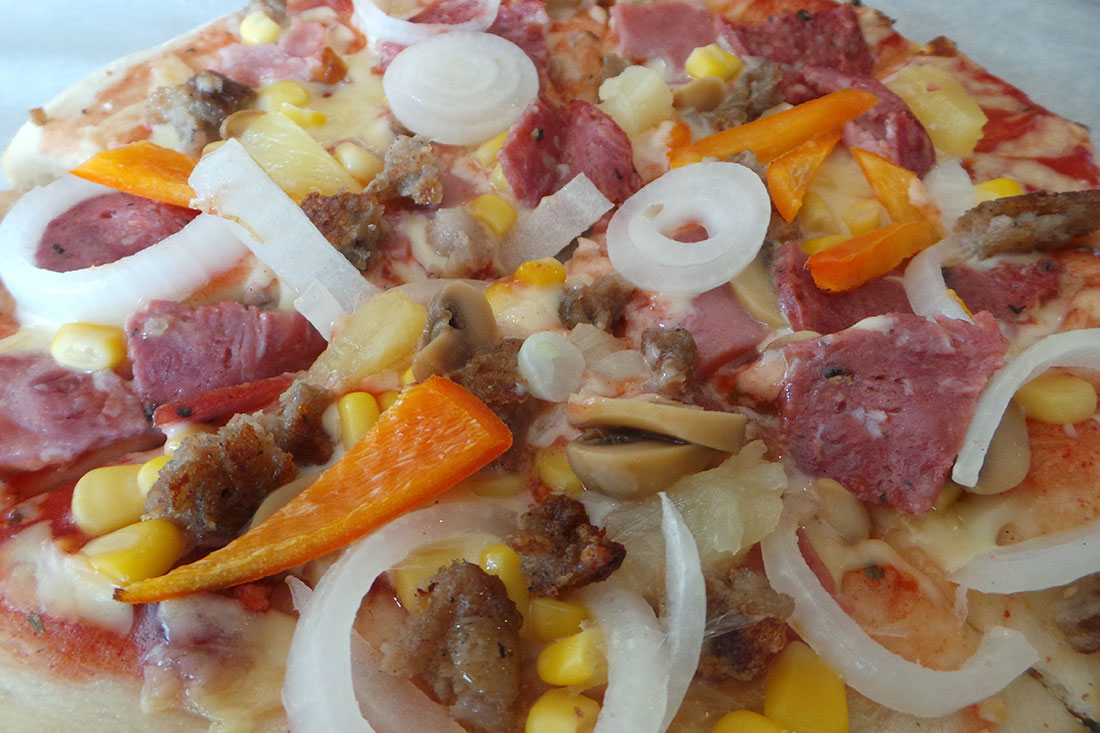 Around 4:00 PM we found ourselves in a port-bound jeepney. Much to my delight, it departed even if there were only three of us. After an hour we were back at the port and since we were way too early, we ate lomi at a nearby carinderia. The vessel that we boarded this time had an air-conditioned area and we managed to secure a row for ourselves. Aside from the movie Wild Card, there was this annoying guy who was ranting on how Filipinos are so disrespectful by not sharing seats. He was probably pissed that there were four of them in their row. He’s also Filipino, by the way, which makes him disrespectful as well. 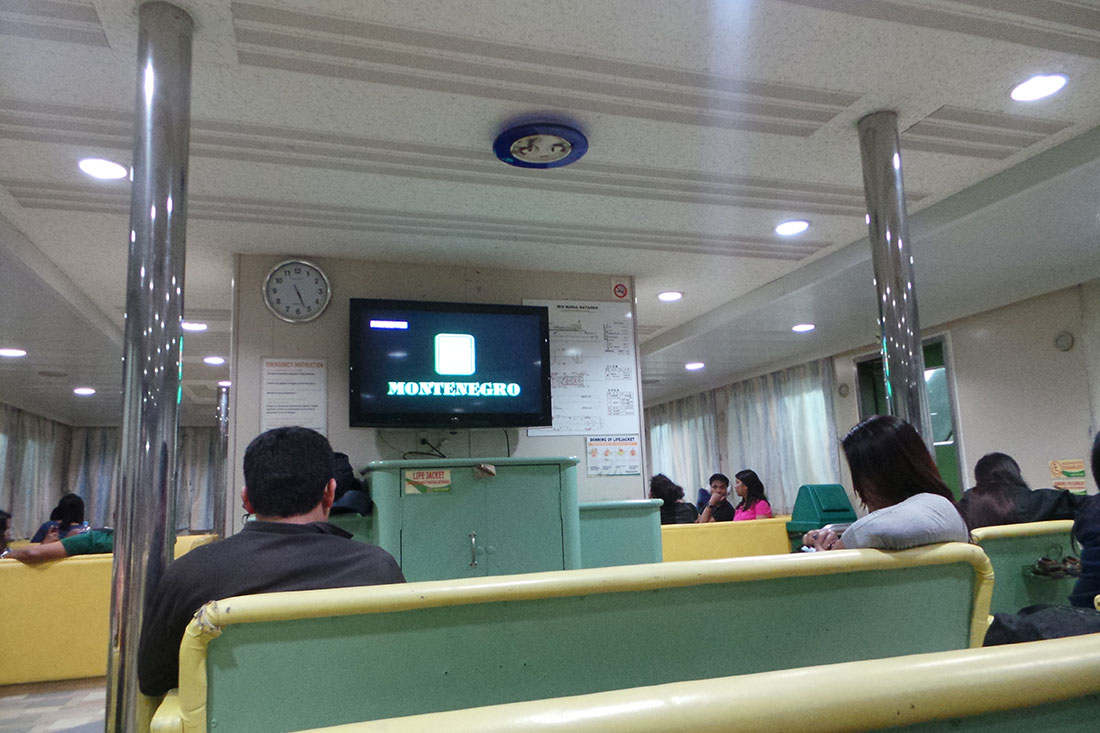 Like at Balanacan Port, public transportation was readily available at Dalahican Port. We took a bus which goes straight to Metro Manila.

If your love for the beach (and summer) is like mine and intend to visit Maniwaya Island, here are a few things which might be helpful: 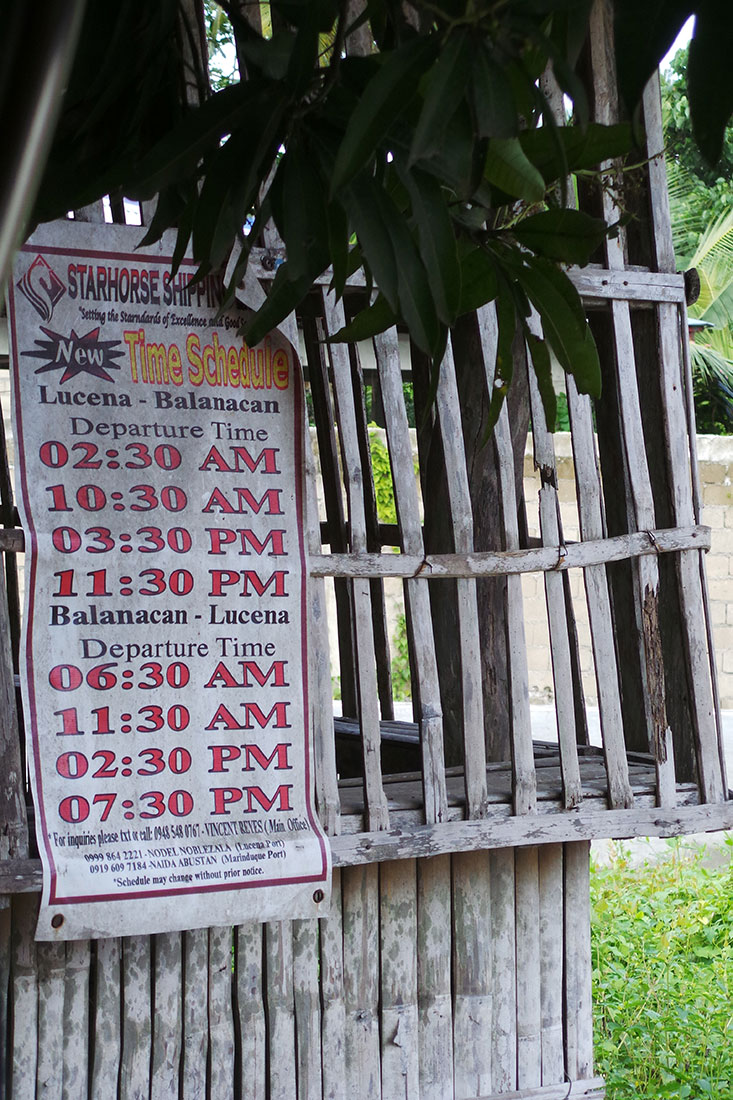 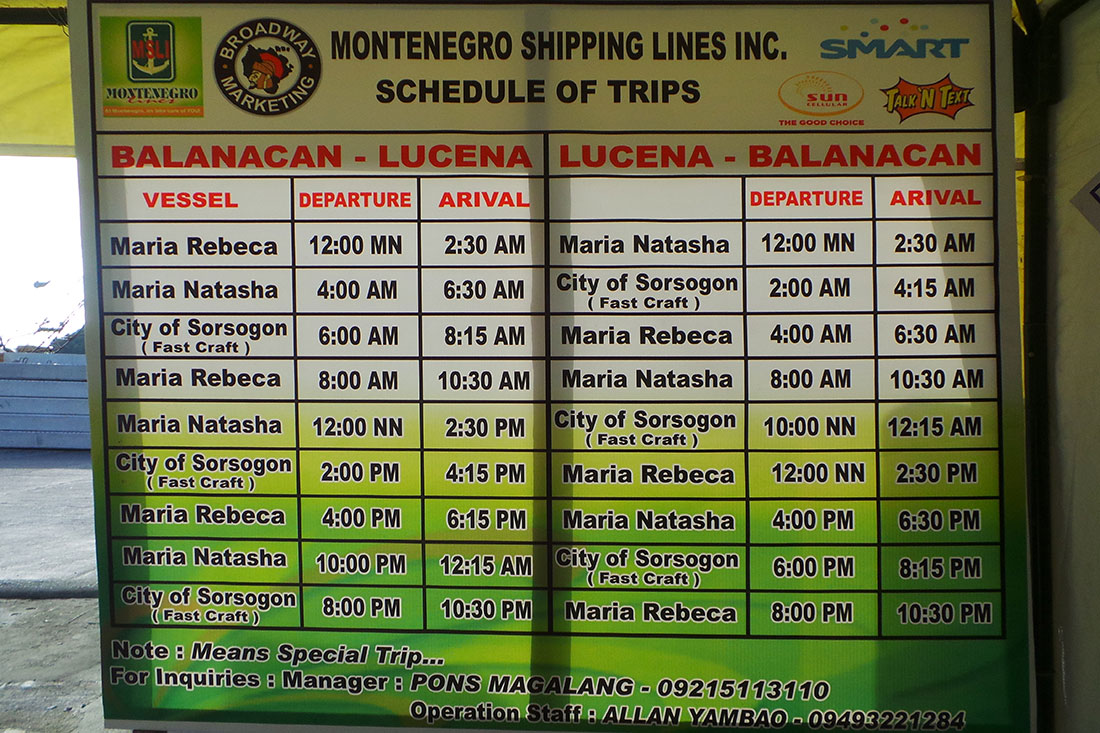 Finally, let’s talk about money, money, and money. The list below is exclusive of food, and you and I both know why.