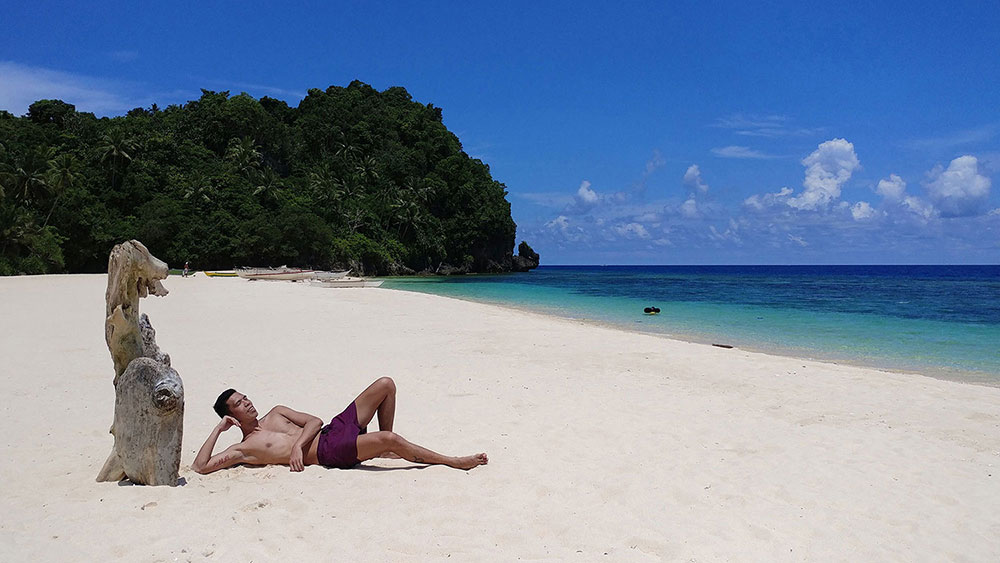 Ever since I tried going to Panay via 2GO Travel I’ve always thought that the island is easily accessible from Metro Manila for a quick weekend getaway. If you’re working on a day shift, you just have to work undertime on a Friday to catch the vessel in the evening and go half-day on Monday (the vessel may arrive early but there’s still the bus ride from the port and it’s a manic day). It wasn’t long until I did it again to bite a late summer escape in Hinugtan Beach in Aklan.

As most of my college classmates are based in Iloilo it wasn’t difficult to convince some of them to come with me. After careful consideration, we had things laid out; we were to go to three destinations in just two days: Hinugtan Beach, Igpasungaw Falls, and Seco Island. (The last one will also have a post of its own so don’t fret just yet, honey.)

The port where the vessel from Batangas docks is Caticlan Port (that’s right, it’s already the port where you can get your arse on a boat to Boracay Island). Hinugtan Beach is located in the barangay of Alegria in Buruanga, located some 12 km from Caticlan. A jeepney just left by the time we congregated and since we may wait long for the next one to leave, we hired a tricycle for ₱350 instead. Travel time was around 30 minutes.

The port in Alegria was still being constructed but that didn’t stop us from hitting our first bird. Our contact, Jun (+63 947 178-9013), wasted no time and immediately had us seated in a pump boat. Its size was just enough to fit all of us. The ride only took another 30 minutes so there was nothing to worry about even if there were no life vests onboard. *evil grin* During that time, an Aklanon classmate affirmed that Hinugtan Beach can only be reached by land by foot. 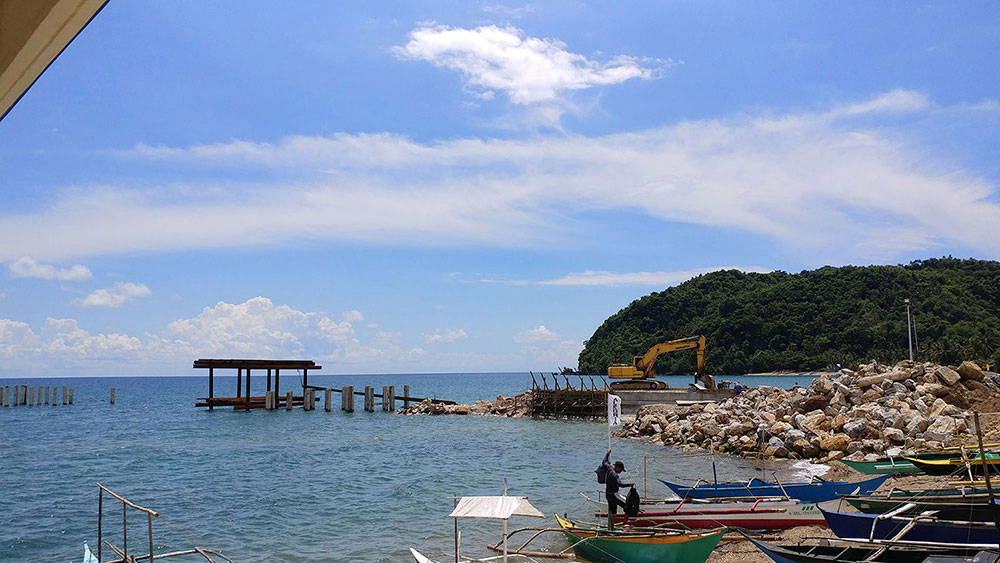 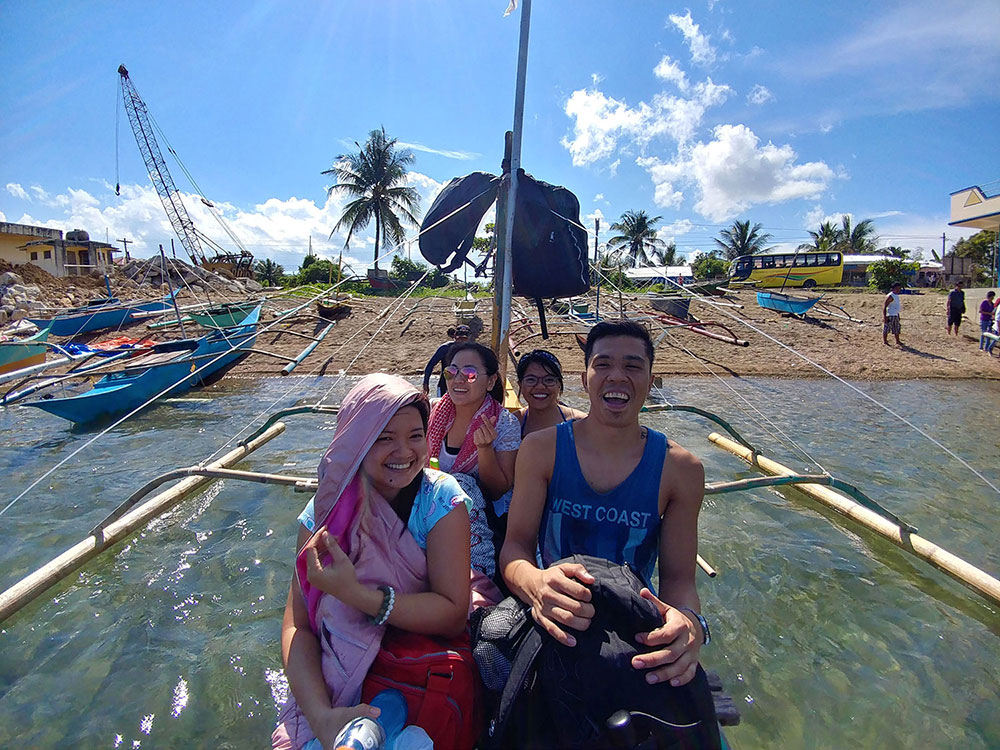 We rented a cottage for ₱500 on the left side of the beach (when facing the oh-ocean) which was big enough to accommodate twice or thrice our headcount. Below were the views on our right and left, respectively. As you can see, it’s pristine and the sand is reminiscent of Boracay’s and Hambil’s. 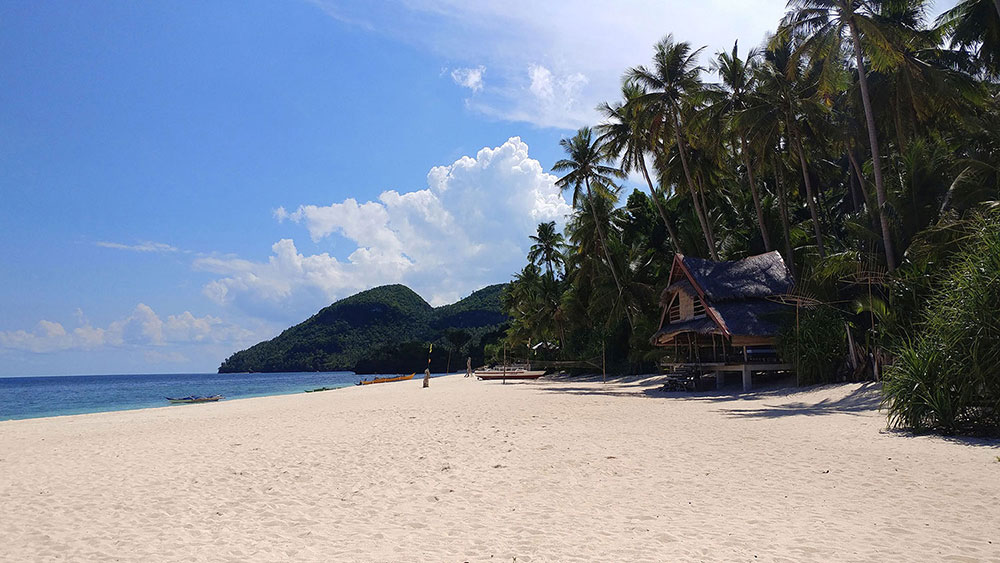 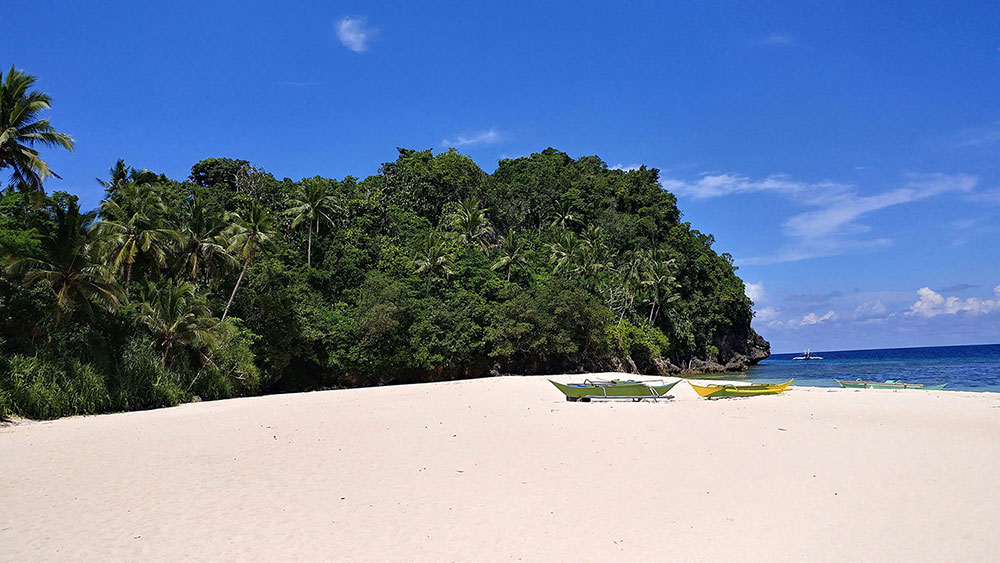 At the far right end were kids jumping off a rock so, being the self-proclaimed good swimmers and daredevils that we are, we investigated what the fuss was all about. In Tagalog, mga usyosero. 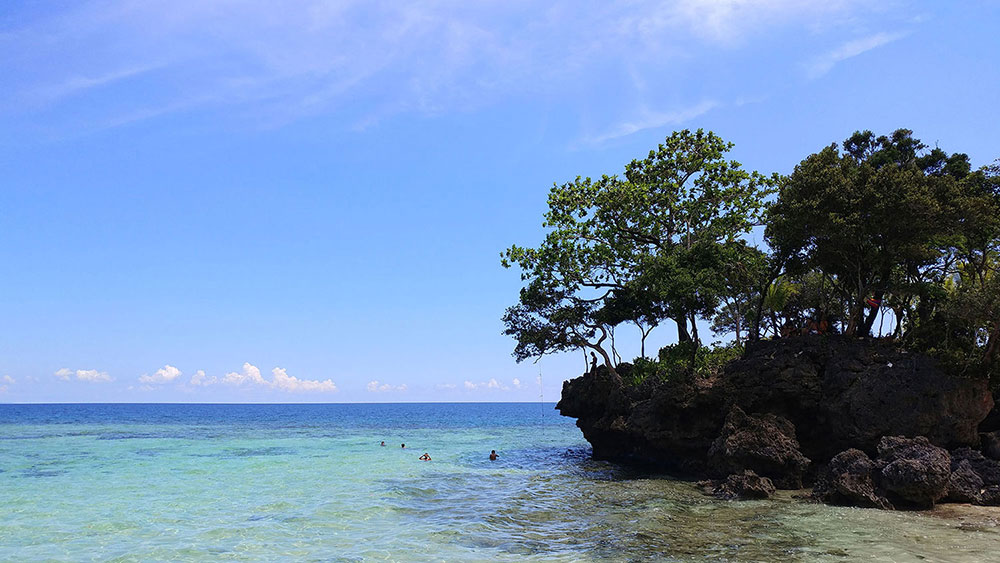 As it turned out, the water they were jumping into was hardly deep that we simply had to retrace our steps after we got there. Below was the view of Hinugtan Beach from that side. 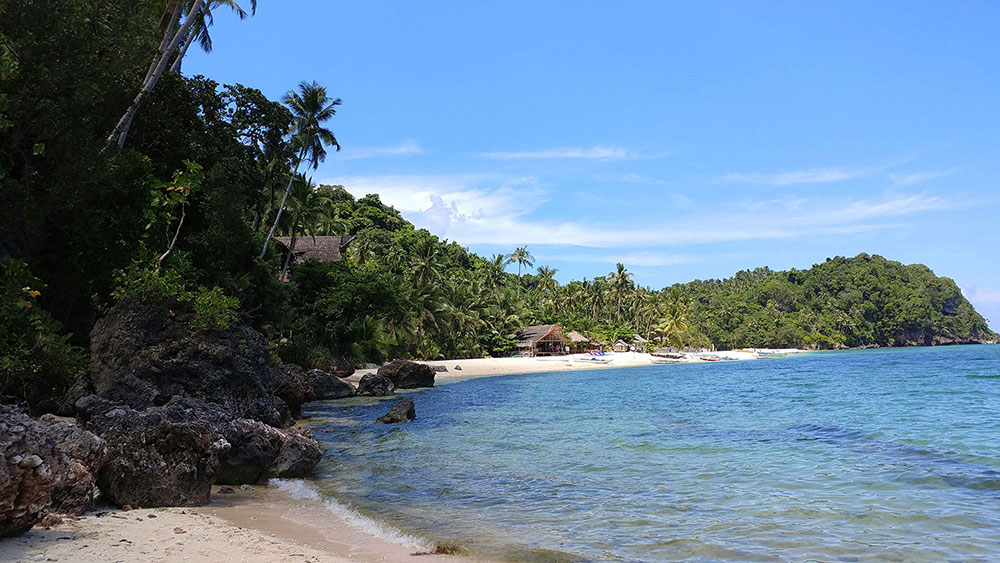 There actually exists a number of resorts already and among them is Hinugtan Beach Resort. Despite its name sounding like it should be the only resort around, surely that couldn’t be the case, right? Otherwise we would’ve been thrown into the sea for not staying with them. Kidding aside, when I checked their website I instantly thought that I could enjoy Hinugtan Beach in a way cheaper price. And I wasn’t wrong. Even if we stayed overnight, we still would’ve incurred less financial damages for not staying with them.

Of course, there’s no stopping you if you have the budget and wanna stay with them. 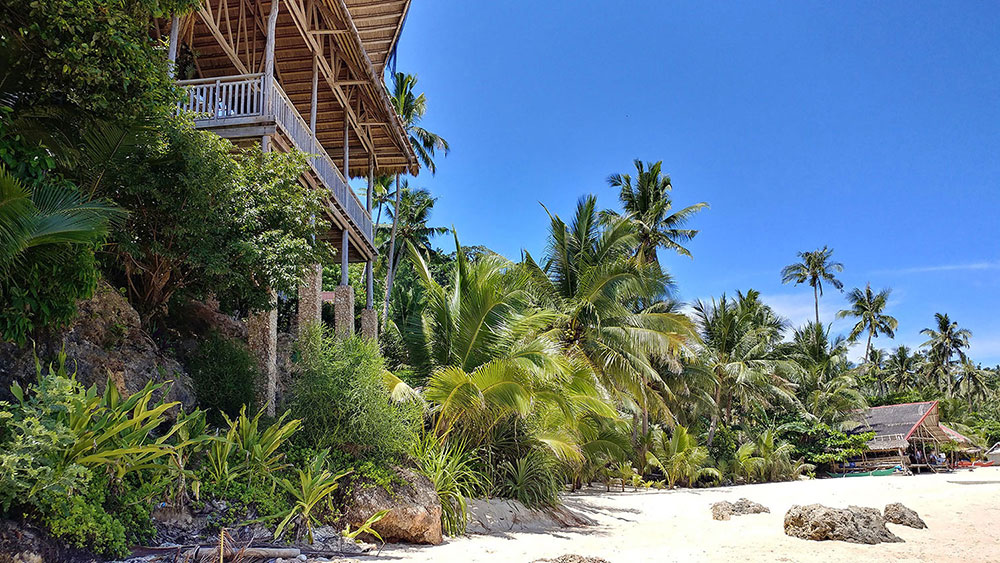 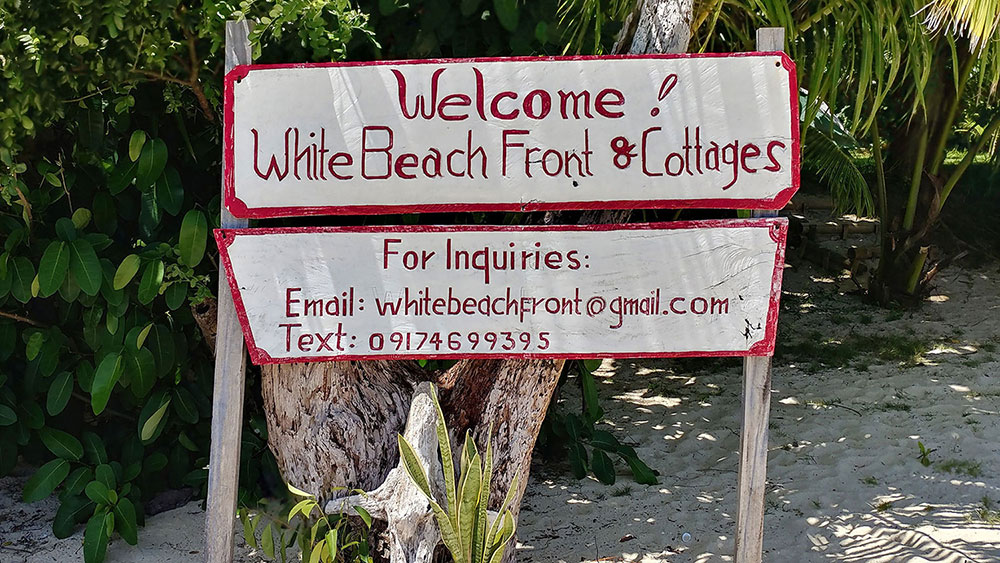 Splurging in the water was pure bliss. I forgot to ask though if, like in Boracay, there are also months when green algae is all over the place. Be careful of sea urchins, by the way! 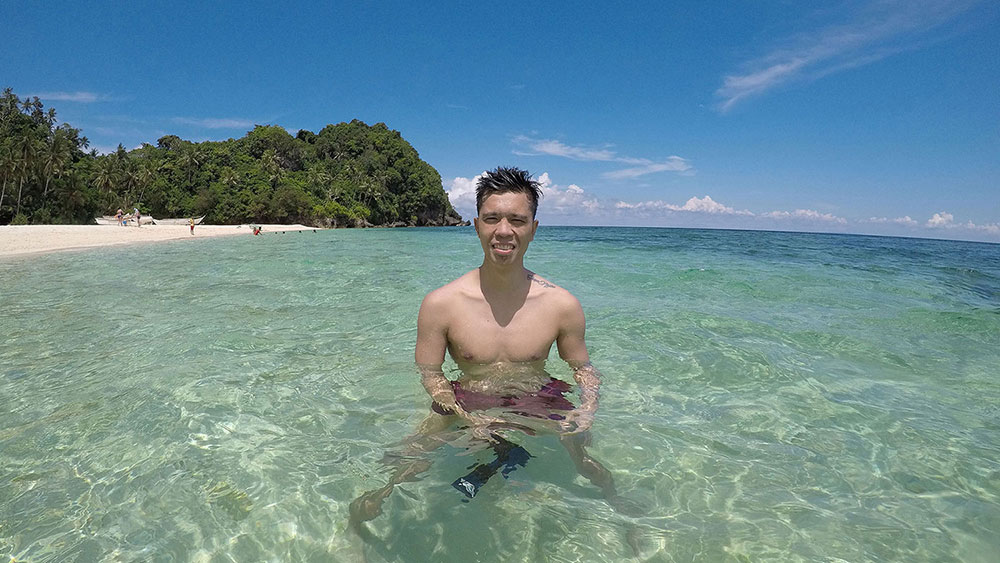 As we still had long days ahead of us, we cleared the stage after only roughly three hours. I am more than willing to go back on a full day tour or even overnight. I, for one, think that despite its proximity to Boracay, it doesn’t get as crowded. 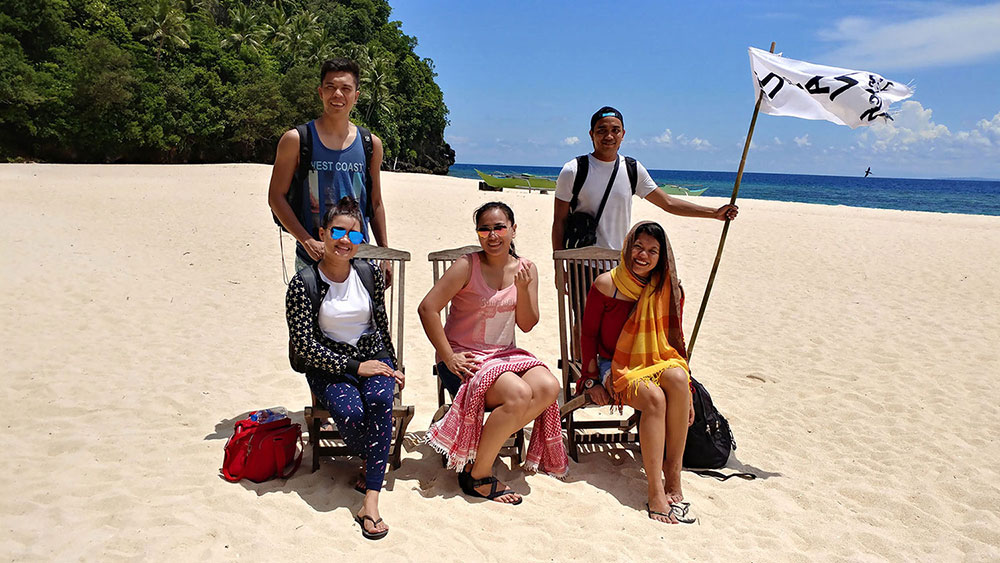 Also, I had no idea that Ariel’s Point is along the way. I haven’t been there and all I know about it is that it’s a spot with diving boards and is usually accessed via tours from Boracay which is inclusive of a buffet lunch. What I didn’t know is the presence of a highly elevated board which probably has the same height as the highest one in Salagdoong Beach Resort in Siquijor! Dayum. I’ll conquer it one day if I’m finally able to afford a tour. Haha. It was deserted on our way to Hinugtan Beach but was already crowded on our way back. Should’ve asked if it’s possible to sneak in there by not coming from Boracay. 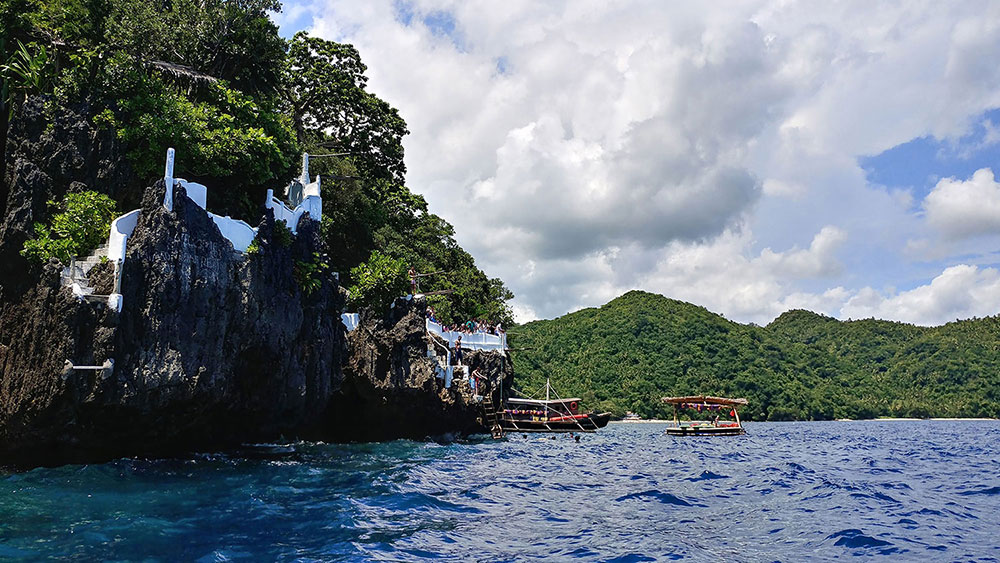 Even before arriving in Panay, Jun already told me that it’s up to us how much we’ll pay him as he doesn’t seem “comfortable” on how much he’ll charge for his boat services. I thought of giving him ₱500 but a companion suggested ₱700. When I handed him the amount he said that it was too much but since it has already been decided and all was good, end of discussion.

Excluding the food that we bought at the grocery, our expense so far was only ₱1,550, which is ₱310 per person. Good game, eh? It’s a golden rule to haggle and never give in to the initial prices offered by operators. For our tricycle ride from Caticlan, the initial offer was ₱400-450. As for our boat rides, we could’ve paid just ₱500.

And with that, we were ready for Igpasungaw.

A way cheaper alternative to going to Palau or Ind

Long overdue but could feel the adrenaline rush al

Be it twilight or dusk.

Updated the permalink of this post and just found

What else could be looming this 2020?

What better way to start the SEO optimization atte