If you haven’t heard the news, March is almost over and so is the first quarter of the year. (That’s time being ruthless for you.) And so, summer is basically upon us again. This ain’t the first beach for me this year but because I loved how quick and easy it was, well, here I am bragging about it first.

The JAM Liner terminal was crawling around 5:00 AM but thankfully most of the people were not bound for Lemery, Batangas. With an accident in EDSA that early, it was three hours and twenny (felt the twang there?) minutes before we got off in front of Xentro Mall. After munching at Jollibee we immediately headed off to the pick-up point but were shookt (in case you’re not familiar with millenial slæng, that meant “shocked”) when an extension of EDSA was in town; the main road was under construction so I practically started sunbathing at the back of the tricycle driver.

Around forty-five minutes elapsed and there we were, walking towards other groups of people who were also waiting to be whisked away. To my not-so surprise, I met two (which later became three) folks from last year’s getaways. Twenny more minutes for the boat ride and we were finally at Binukbok Viewpoint, which is already part of the municipality of Bauan. 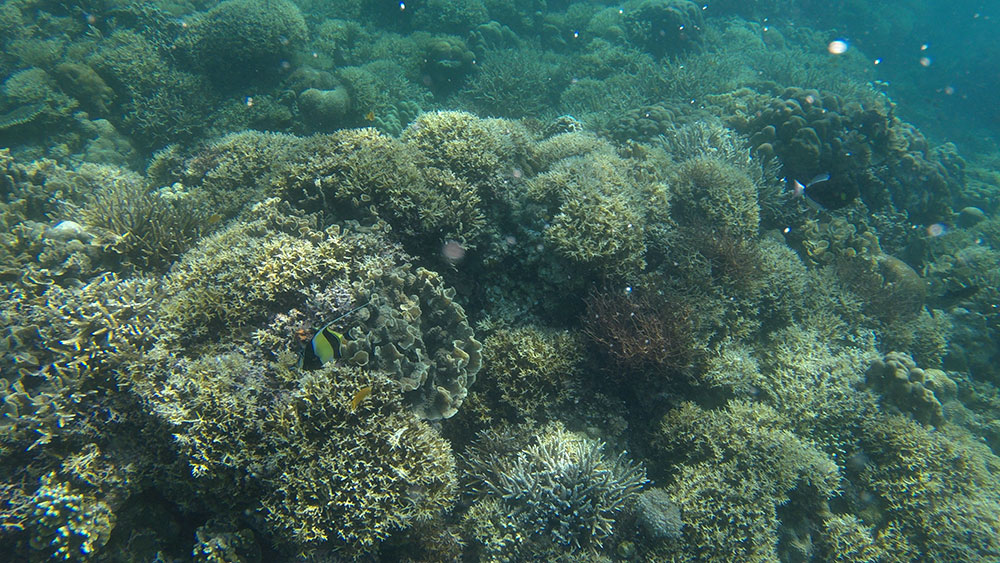 Having arrived later than anticipated and with the beach just in front of the resort, we di(d)n’t waste another breath and made out with the aquatic life. On another note, pardon my sneezy look in that photo. 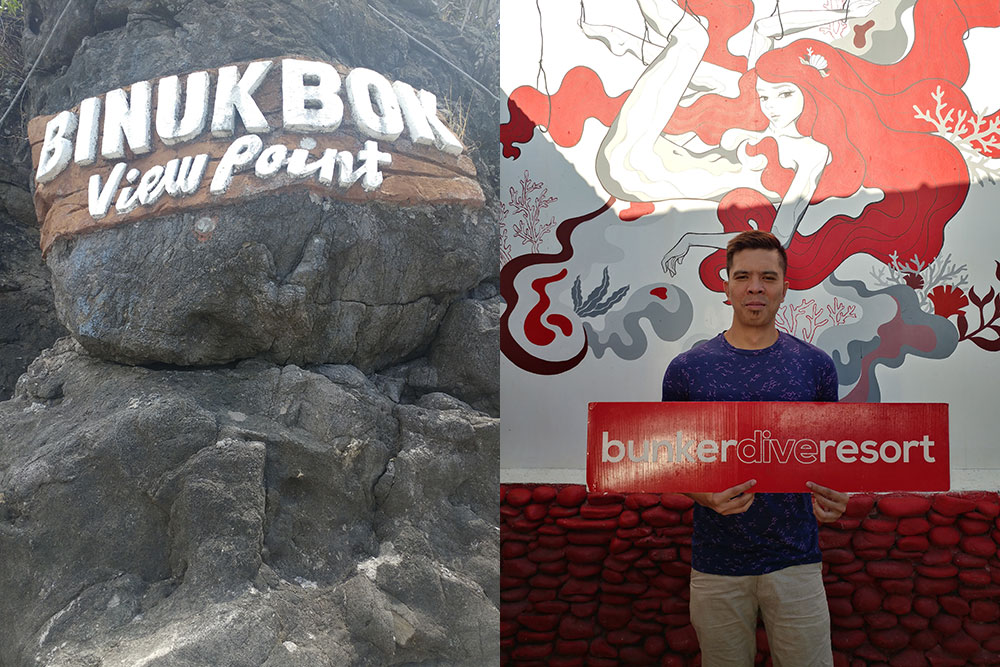 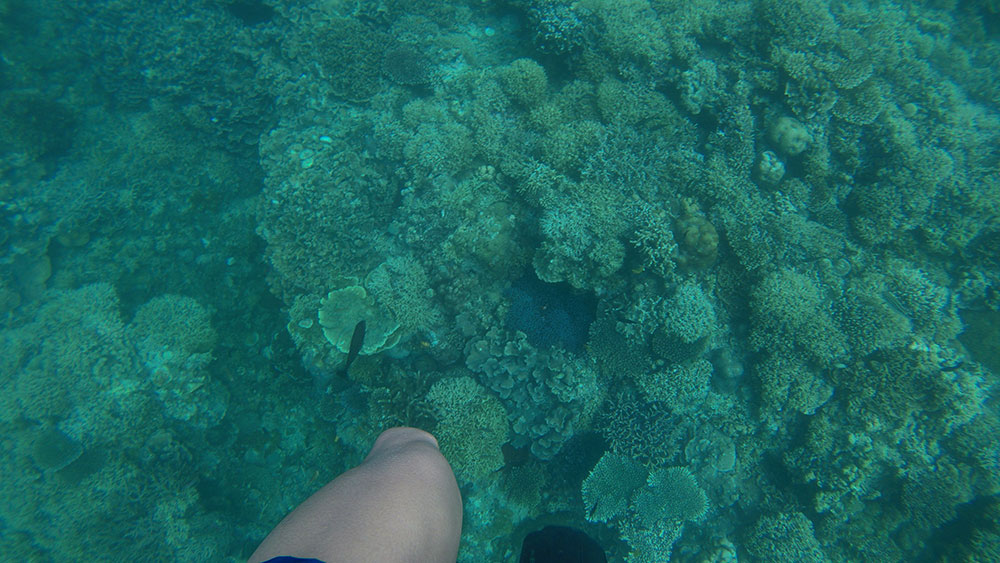 The site is perfect for snorkeling and learning and practicing skin diving. It even goes beyond that when the sun is up and about and not behind the comfort of clouds. 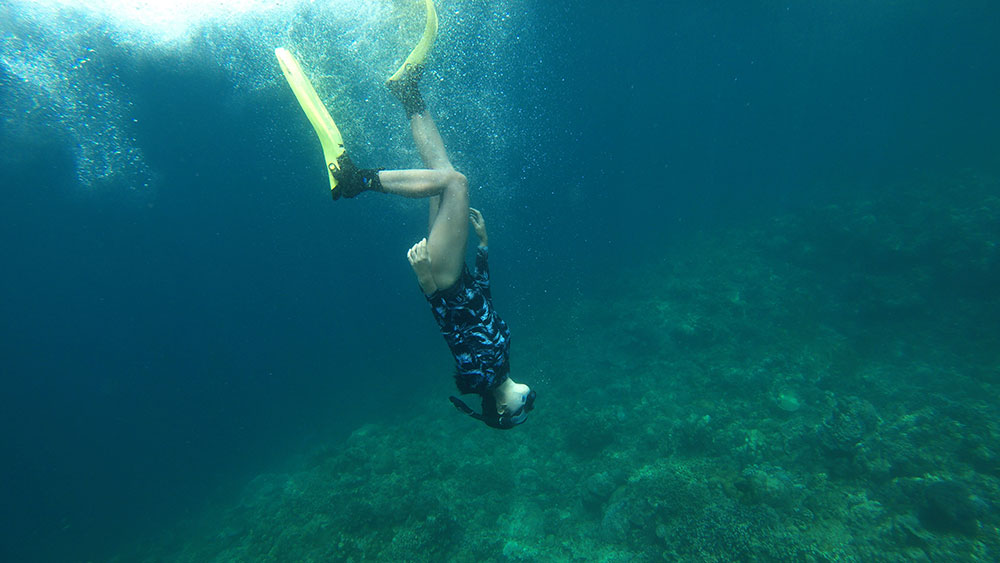 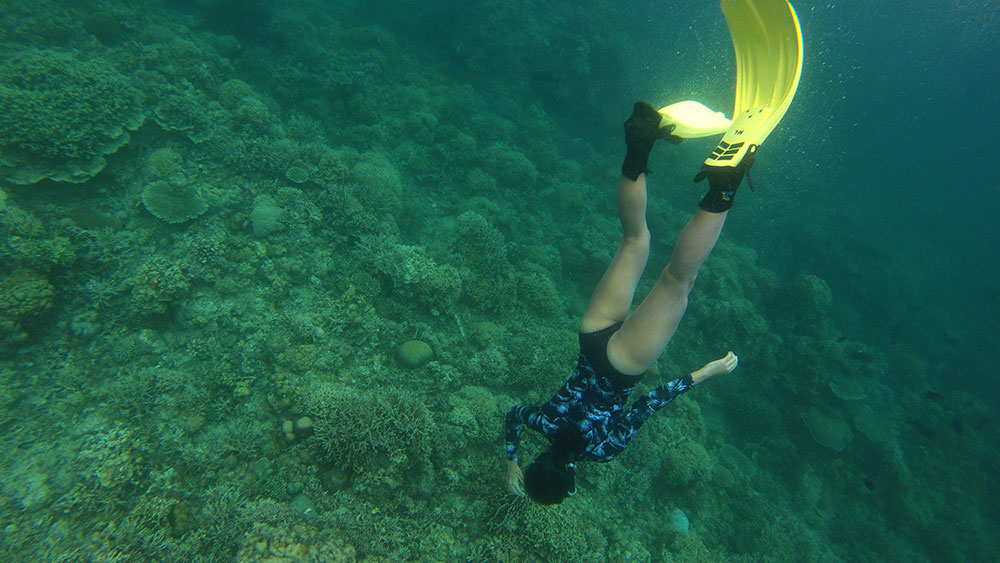 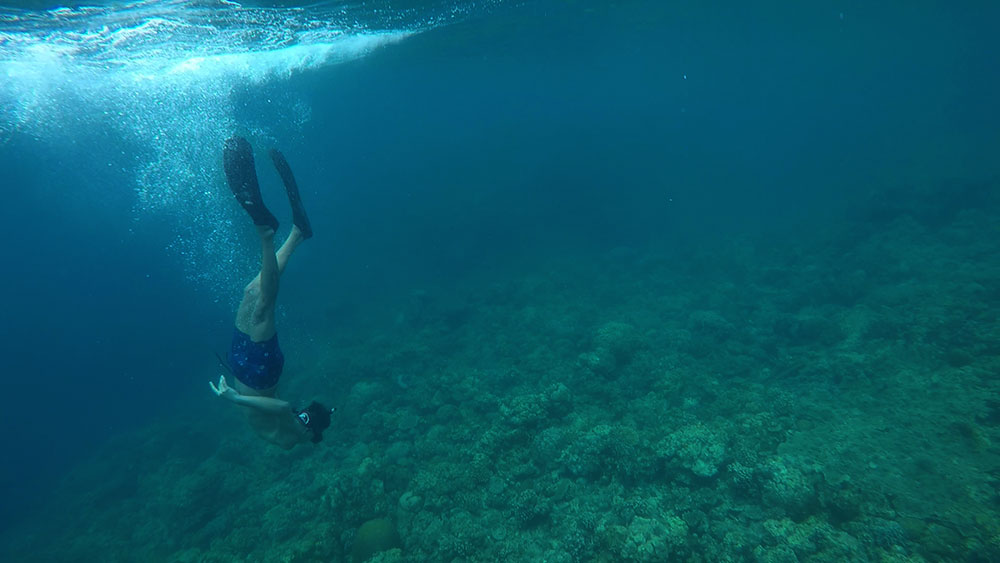 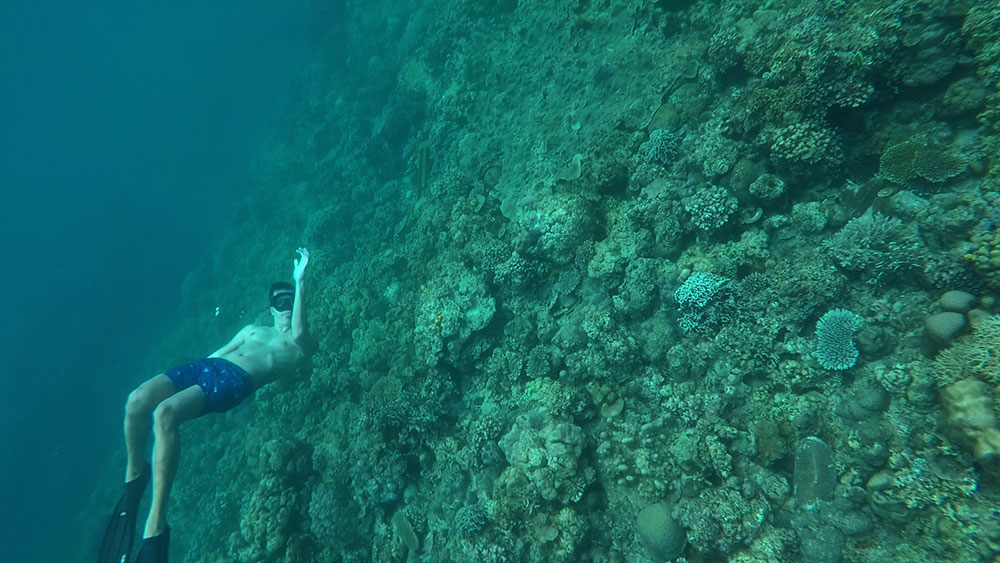 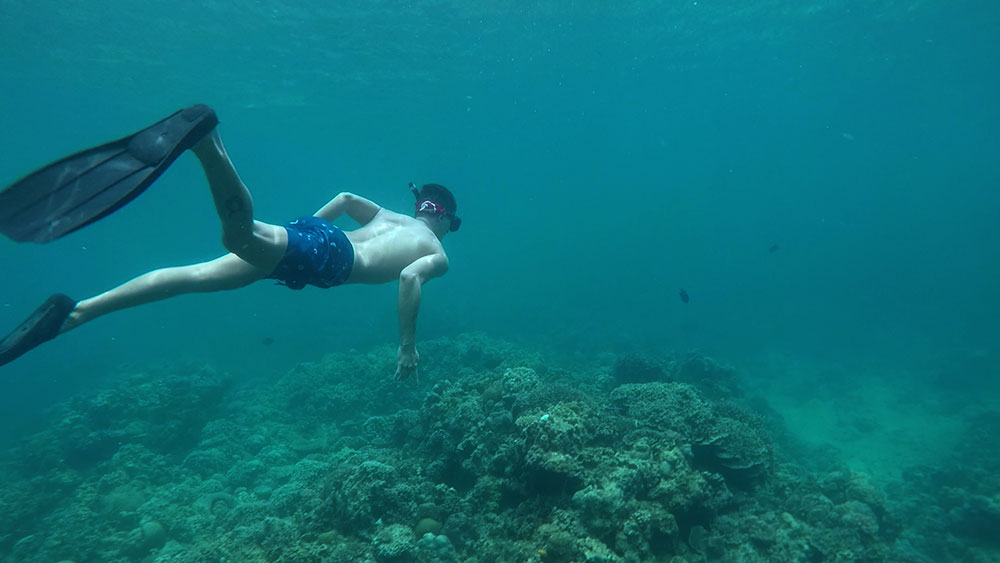 Seeing boats come and go with passengers in life vests getting off to snorkel made me realize that it could be the same site I went to a few years back with a different set of friends. That time not a single soul in our group brought money so the boatmen collecting the entrance fee or something got pissed. Thankfully we were not shooed. Anyway, that’s another story.

I haven’t really thought of enquiring rates but scuba diving is also available. Malamang. Or could it be, that the massive school of trevallies below simply drowned the thought away? How I wish I had a fishing net. I heard it’s better than using dynamites. JK! 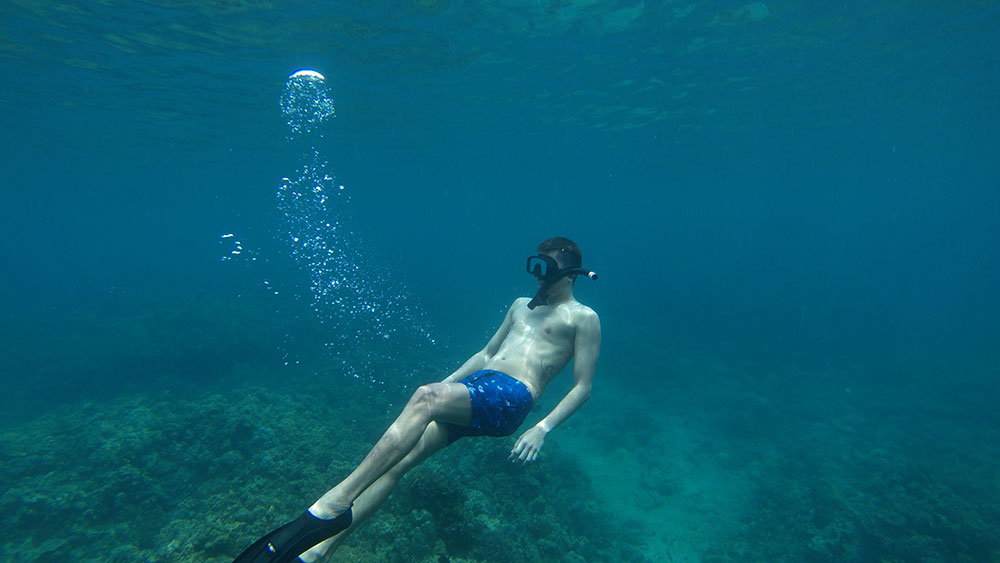 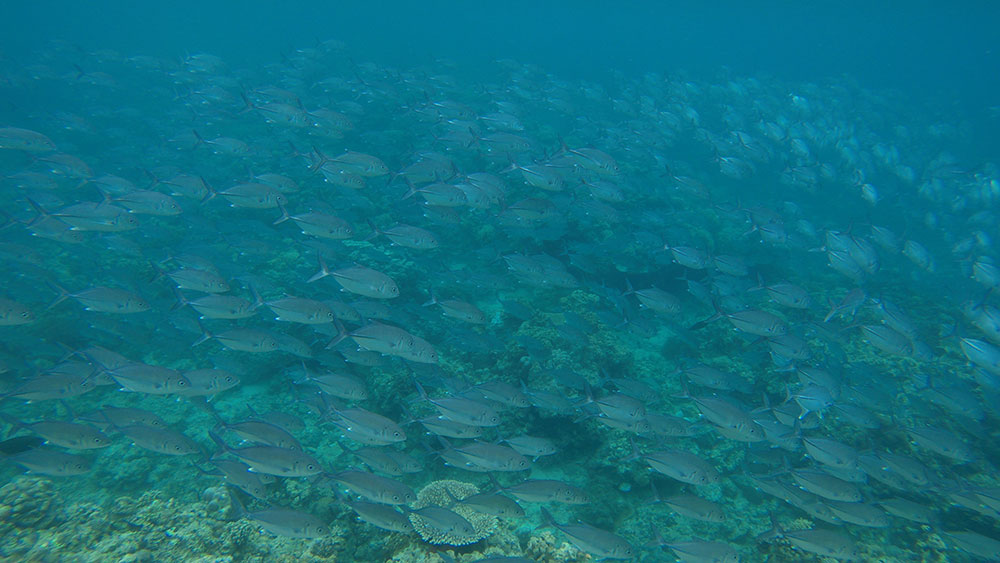 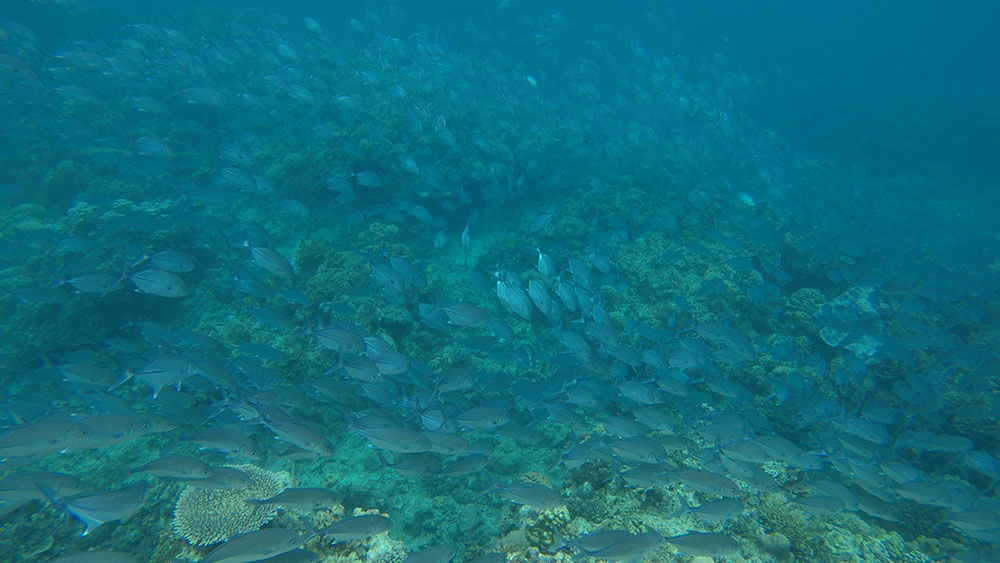 Part of the day tour rate in the resort is a buffet lunch, but according to the lady in charge, they serve meals by the plate when there are only a few guests or guests don’t to eat at the same time, which was the case when we were there. We had pochero, laing, and chicken feet. Now, I generally have quite the appetite and if it weren’t for the satisfactory underwater sightseeing, I would’ve gone berserk and flipped a table. Fortunately the food was just right for us so I no longer bothered asking if they would refill it had I asked for it.

There was already coldness in the waters in the morning but in the afternoon it seemed to have spread. Even with fins, propelling around no longer felt easy because of the temperature. Nonetheless, we lasted for two hours and saw more creatures up close as well as other schools of fishes. The crown-of-thorns starfff… Wait, what? How could this be a starfish. *insert grumpy emoji here* Turns out it’s a nasty coral predator. Puksain! 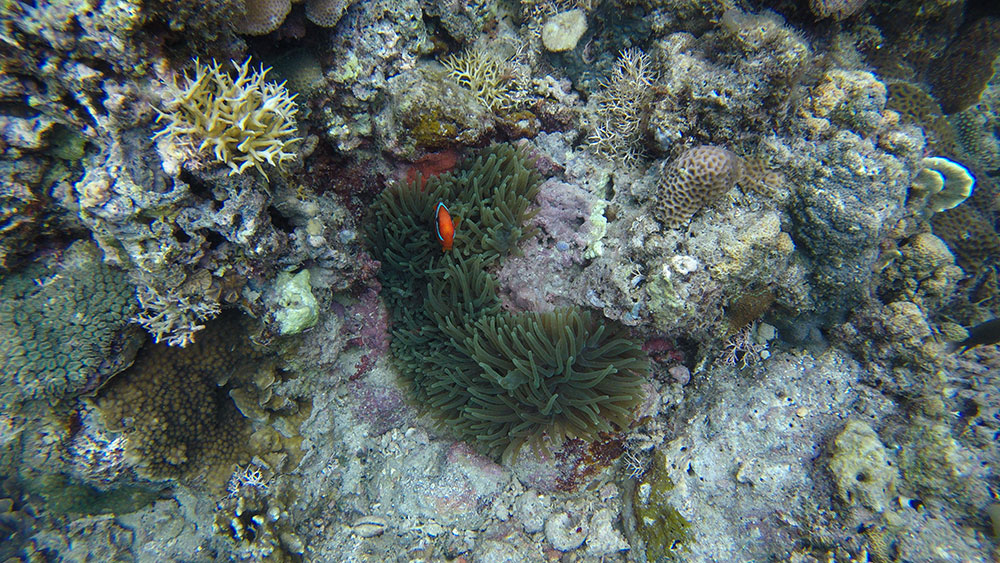 A year-long supply of unlimited beer on me to the first one who can tell me the name of these transparent-looking fishes that open their mouth like “Whuuut?” while swimming swiftly. Offer expires in five seconds. 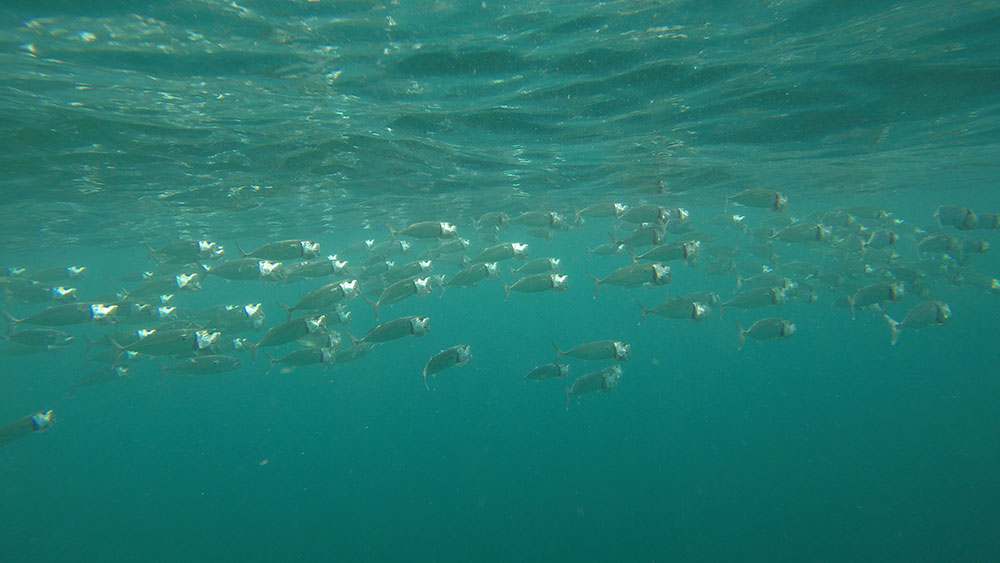 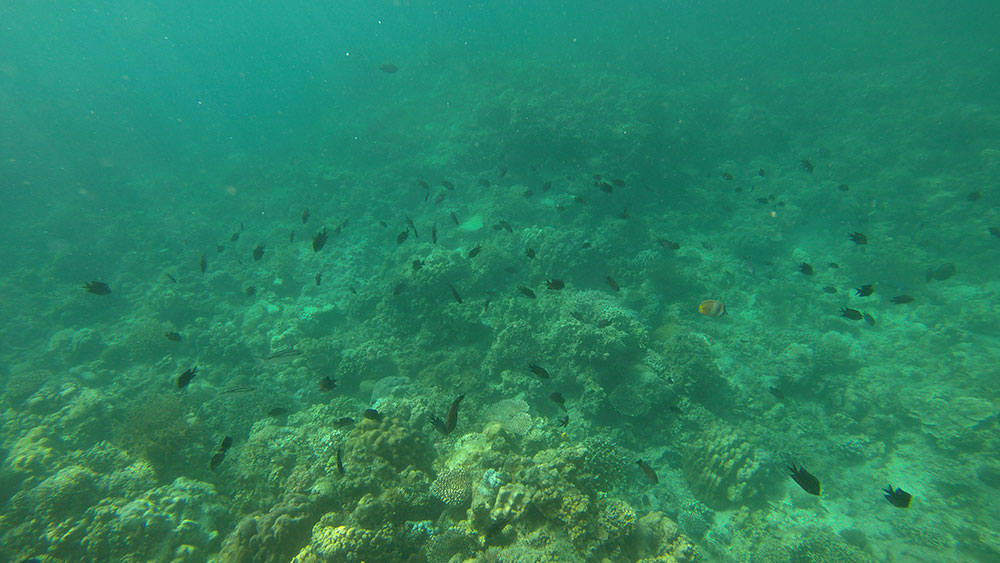 I’ve been told that sea turtles can be seen early in the morning and that being said, you can opt to stay overnight if you intend to catch a glimpse of them or if a day simply isn’t enough for you. They have air-conditioned dorm and private rooms and also a private fan room. Rates start at ₱1,750 inclusive of boat transfers and three meals. For details you may contact them via their Facebook page. I’d say I’d spend the night next time. 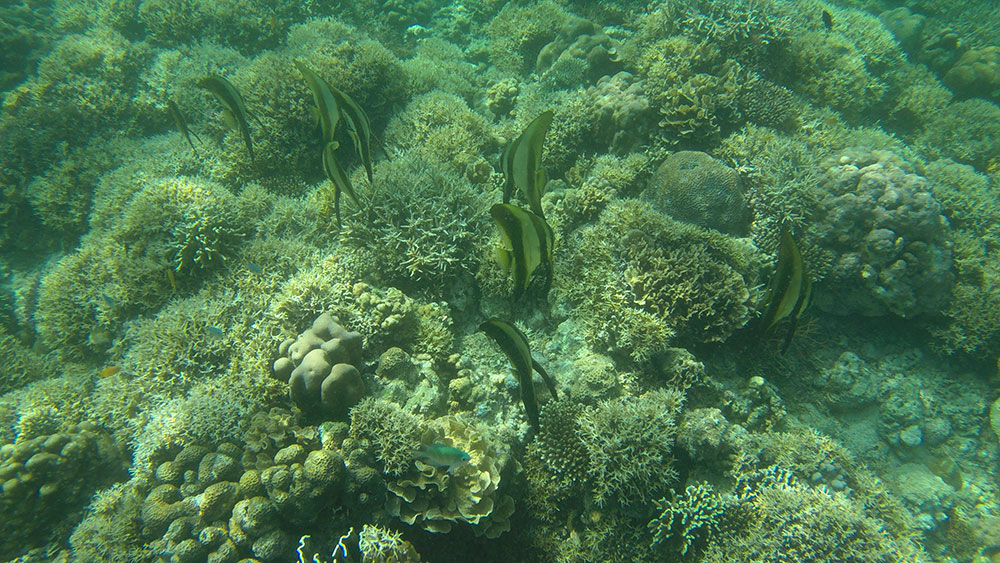 Sunsets look stunning everywhere IMO (okay, that was “in my opinion”) but I’m still gonna say it looks stunning from the Binukbok Viewpoint. Must be because of those platforms. Some people were well-prepared that they had props for their photos as the sun was being extinguished. If they want it that way next time I’ll have a photo taken wearing this, wearing only this. 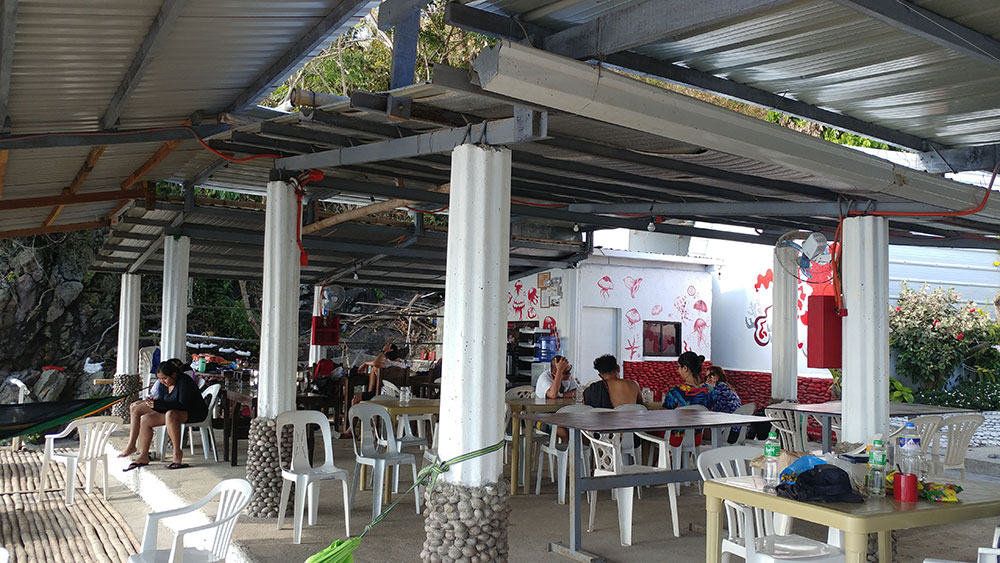 Timing is everything; something mundane could be a

Another day, another purpose.

Ever wondered why it always feels faster when goin

Strange, but after seeing this I suddenly pine for

Cracked fingertips no more and sought some sun but

After crossing the midweek and still not progressi

You look familiar... Are we family?

When you claim to be a non-believer but know yours

Almost 15 years in between. Managed to hold on to