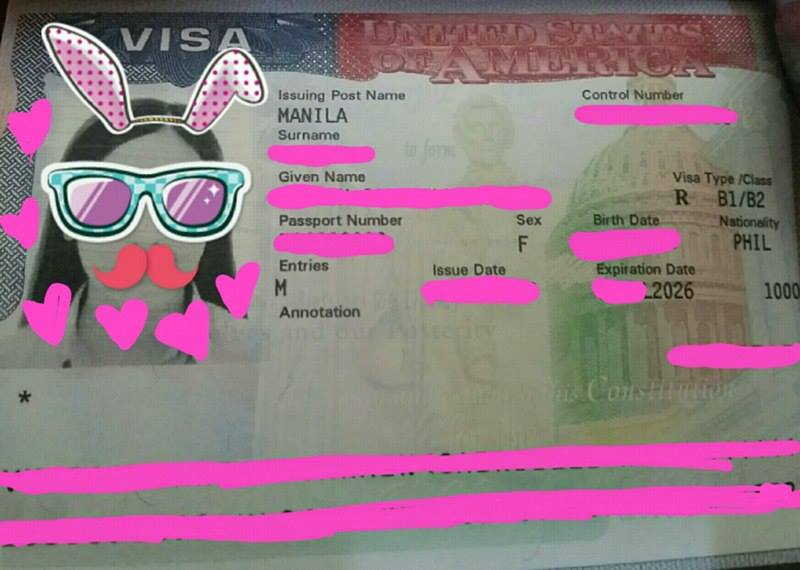 So my mom and I decided to have our US visas renewed upon learning that Donald Trump might be the next US president. He has spewed several racist remarks, which made us think that getting a tourist visa could be difficult under his administration.

Filling up information in the embassy website should be done in all honesty, which we did, of course. On top of that, we prepared documents that may be needed during the interview, which are the following:

Just like what most people say, in order to be granted a US visa (or any visa for that matter), applicants must show strong ties to their country, that there’s enough reason for them to go back. I was scared, as I have so many red flags: I am single in my very late 20’s (sorry, the exact age is classified, haha) with a mediocre job and compensation in the government, I have no child, and I barely have any savings. I actually had to borrow some money from my parents to put in my account.

We were able to book an appointment for the interview two weeks after submitting the forms. Since we’re not from Manila, we had to book flights and hotel accommodations (additional gastos!). We stayed in Bayview Hotel because of its proximity to the embassy. For people who don’t live in Manila, it’s a highly recommended hotel. Since the embassy prohibits bringing of cellular phones, we only brought our documents and money in a plastic envelope.

It only took us 15 minutes to reach the embassy at eight o’clock for our 08:30 appointment. Aside from the many people already waiting for their respective schedules, there were also vendors around the premises, with some selling pens. There’s no need for any pen as there’s no need to fill up anything inside the embassy. Those with appointments at 08:30 were called by an employee and started falling in line 15 minutes before the schedule.

The line was divided into two: immigrant and non-immigrant applicants. The necessary documents are checked at this point. We indicated in the application the we are applying as a family but since I am of legal age, I thought that I would be given a separate number from my mom. We were surprised and happy at the same time when the employee didn’t separate us after checking our documents and passports.

Inside the building is an area with seats and a few kiosks for food and picture taking (in case you need to retake your picture if instructed by the consuls). While queueing for our fingerprints to be taken, we clarified with a Filipina embassy employee if indeed we’ll be applying as a group. When she confirmed it I wanted to “Yaaay!” on the spot. Hahaha. Anyway, processing the fingerprints was a breeze. Then came the dreaded interview portion…

Contrary to what our friends told us, we no longer needed to sit on chairs and wait for our number to be called. We were simply instructed to line up. An employee directs applicants to the window where they will be interviewed. In our case we lined up at a counter where the two applicants ahead of us were denied. The first was a mother and son. They were carrying their passports away from the counter which meant that their application didn’t make it. The next one was a doctor. She was interviewed for around 10 minutes. The consul was obviously skeptical of her reason in visiting the US (heard from a grapevine that doctors have a hard time securing visas because some of them do TNT or tago ng tago, doing jobs illegally). In another counter I heard another applicant getting denied because she had a history of overstaying (more than six months for a tourist visa). The consul explained to her that she could not be granted a visa because anyone who overstayed in the US has a 10-year ban.

And then it was our turn! We approached the counter, smiling. The consul’s questions were:

She then tinkered her computer for a few seconds, looked at us, smiled, and said, “Your visas are approved, please wait five days for the delivery.” We thanked her and left the embassy smiling ear to ear. We were not informed of the details of the visa granted to us and did not even bother asking as advised by some friends. Baka daw kasi bawiin. HAHAHA! It was only five minutes past nine o’clock when I checked the time, which meant it took us just 35 minutes to finish the whole process! Which was really fast. All I could think of after was “Hindi nasayang gastos namin! Yaaaay!!!” After four working days, we received our passports with the US tourist visas, multiple entries valid for 10 years. Now doesn’t that deserve another “Yaaay!”?!

I am no expert in applying for visas, but I want to share some tips (based on my experience lang ha!) in applying.

Timing is everything; something mundane could be a

Another day, another purpose.

Ever wondered why it always feels faster when goin

Strange, but after seeing this I suddenly pine for

Cracked fingertips no more and sought some sun but

After crossing the midweek and still not progressi

You look familiar... Are we family?

When you claim to be a non-believer but know yours

Almost 15 years in between. Managed to hold on to